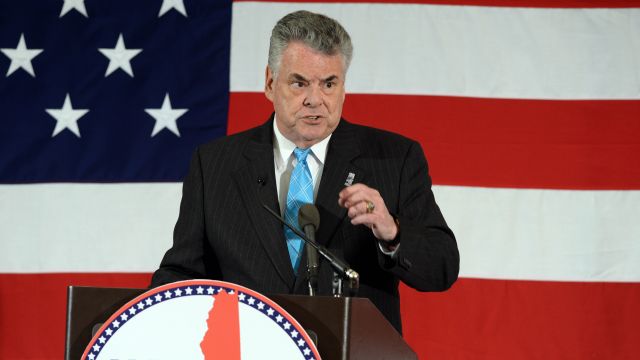 By Matt Picht
May 13, 2016
King was criticizing the foreign policy opinions of his party's front-runner, Donald Trump.
SHOW TRANSCRIPT

Rep. Peter King of New York isn't sorry about using a racial slur as a rhetorical flourish during an MSNBC panel show.

King said, "I don't know if he's thought them through or is just like the guy at the end of the bar who says, 'Aw, screw 'em. Bomb them, kill them, pull out, bring them home. Why pay for the Japs? Why pay for the Koreans?"

That was King comparing Republican front-runner Donald Trump's foreign policy ideas to the impulsive opinions of a random drunk at a bar. King, by the way, is endorsing Trump.

But King's use of the World War II-era slur for Japanese people drew the ire of groups like the Congressional Asian Pacific American Caucus. The group's leader, Rep. Judy Chu, told The Hill King's language "is disgusting and harkens back to a shameful time in our history."

When The Hill contacted King about the issue, he said, "I was using it to make a point, and I would make it again. ... We're getting too politically correct. Let's not get overly sensitive here."