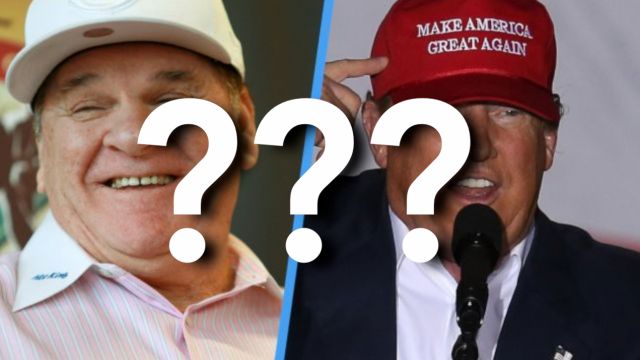 SMS
Pete Rose's Attorney Doesn't Know How Trump Got Signed Ball
By Matt Moreno
By Matt Moreno
March 15, 2016
Donald Trump tweeted an image of a baseball autographed by the Cincinnati Reds star, but Rose's attorney says it's not an endorsement.
SHOW TRANSCRIPT

"We've got to let Pete Rose into the Hall of Fame," Donald Trump said during a campaign rally in Ohio.

We and many other outlets reported that as an endorsement for Trump, but Rose's camp says that's not the case — and it might not even be Rose's signature.

An attorney for Rose said in a statement, "Pete has made a point not to 'endorse' any particular presidential candidate."

He later told The Washington Post, "We do not know how Mr. Trump got the ball. I can't authenticate the ball from some Twitter picture. ... Pete didn't send it. I made that clear."

As FiveThirtyEight points out, Rose is a bit of a prankster when it comes to signing baseballs. He's been known to write things like "I'm sorry I broke up the Beatles" or "I'm sorry I shot JFK."

This video includes a clip from CNN and images from Rob Bixby / CC BY 2.0 and Getty Images.