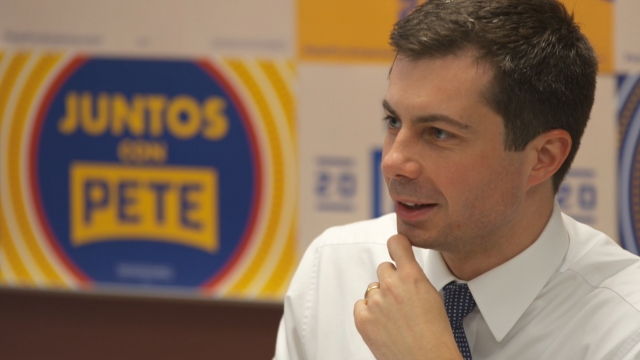 Nevada is one of  the most diverse early voting states. And it's where Mayor Pete Buttigieg went after the 6th Democratic debate -- with hopes of winning the support of voters of color.

Buttigieg spent time with voters and local leaders from the black, Asian and Latino communities in Las Vegas. While he's seen his poll numbers surge in Iowa and New Hampshire, states that are overwhelmingly white, he's struggled to connect with voters of color. In Nevada,  shows Buttigieg in fourth place behind Joe Biden and Senators Elizabeth Warren and Bernie Sanders.

It's hard to pinpoint one exact reason for Buttigieg's lack of support with voters of color but some have criticized the Mayor for not going far enough to improve the lives of black residents in his city of South Bend, Indiana. Racial tensions there flared up in June after a white officer shot and killed a black robbery suspect who was carrying a knife.

Other Democratic White House hopefuls have challenged Buttigieg's ability to build a diverse coalition, something Senator Amy Klobuchar pointed out during the December debate.

"And the point is we should have someone heading up this ticket that has actually won and they can show that they can gather the support that you talk about of moderate Republicans, independents as well as a fired up Democratic base," said Senator Amy Klobuchar during the PBS NewsHour/Politico debate in December.

Do you think you moved the needle a little bit closer to where you need to be because you need that diverse coalition especially here in Nevada and other places across the country. You took some flack for that I believe from Senator Klobuchar during the debate talking about your ability to build that coalition, so do you think you've changed minds here today?

"Yes I think that's why these conversations are so important," Buttigieg said. "They make it possible for us to get to the really important questions and the difficult questions that anyone who wants to be president needs to answer and I really welcome the opportunity to make sure that first of all that there's a true understanding of our experience back home and that there's a good understanding of what I'm proposing to bring to the presidency."

The Indiana Democrat is hoping his record as mayor and proposals aimed at diverse communities spark interests with voters. His campaign also recently put out testimonial videos from members of South Bend's black community.

"I met Pete when he was running for mayor and he asked us questions about the community but what I saw was that he was accessible to the community. He went out to the community and he listened," a supporter of Pete Buttigieg said in a video.

Many of those who met with Buttigieg in Las Vegas were receptive to his ideas, but there were also some contentious moments during a meet-and-greet with black voters on the topic of race -- something Buttigieg says he would work to address as president.

There was a moment there where you seemed kind of frustrated, tell me about it.

"Well, I'm tired of the script," said Donna Darden, a Nevada voter. "I'm tired of what we need to do and what we need to do [but] nothing like, to use the term..Elizabeth Warren will give you a plan. Don't know if she's going to do it but she will say we're going to do this, this, this and this and that's it. And I guess that's what I'm looking for."

Darden adds that she's looking for bold change and wants to know what Buttigieg would do right away if elected. The South Bend Mayor may also be unknown to some voters across the country, including voters of color -- Something he hopes to change before caucus day in Nevada on February 22nd.

"He's not as familiar as the other candidates and typically, you know, African Americans they identify with people and I just think that that's been his problem," said Ty Jones after meeting and speaking with Mayor Buttigieg.

That work of persuasion is ongoing, it is the day-to-day work that is before you when you're running for any office and I welcome this opportunity to move forward in that direction.