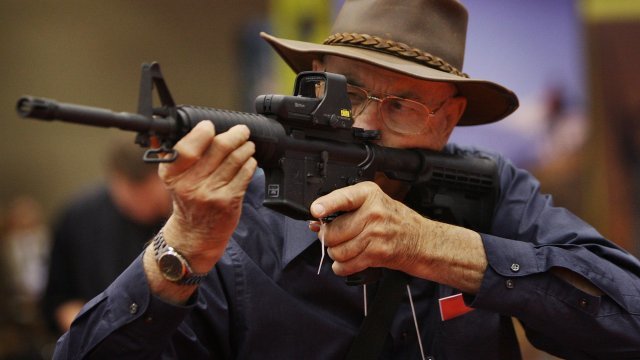 SMS
PETA Offers NRA $100,000 To Follow 'Two Simple Steps'
By Gabrielle Ware
By Gabrielle Ware
August 7, 2018
PETA is leveraging the NRA's financial troubles to try to make it change some of its policies.
SHOW TRANSCRIPT

PETA is offering the NRA $100,000 at a time when the NRA says it may have to close its headquarters due to financial troubles.

The NRA is currently suing New York, claiming state regulators are discouraging companies from doing business with it, and says as a result it's "suffered tens of millions of dollars in damages."

PETA and the NRA have a history.

The animal rights organization has protested the NRA for years.

And last year, the NRA released multiple videos called "Trust the Hunter in Your Blood" that denounced animal rights groups like PETA, which it called "particularly hostile."

"It is the dream of the animal rights fanatics to suppress your most natural connection to the Earth," one video says.

Another video says hunters "are in the middle of a war" and likens animal rights groups to Al-Qaeda.