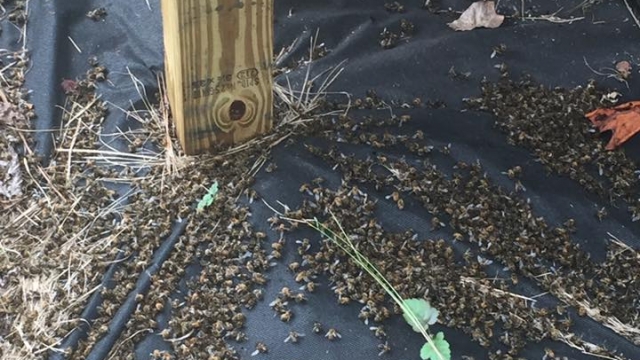 SMS
Millions Of Bees Died From A Pesticide That Slows The Spread Of Zika
By Briana Koeneman
By Briana Koeneman
September 1, 2016
Beekeepers in South Carolina say their colonies dropped dead after officials sprayed.
SHOW TRANSCRIPT

"It was like visiting a cemetery," said a resident of Summerville, South Carolina. "Pure sadness."

And an aerial spray of a pesticide used to control mosquito populations is to blame.

"I couldn't wrap my head around the fact that we spray poison from the sky," bee owner Andrew Macke told WCBD.

Beekeepers in the area say their colonies dropped dead almost immediately after the spray was released Sunday.

A bee farm in one town lost about 2.5 million bees on the spot. And its co-owner says she's devastated.

The pesticide the county used is called Naled. Officials sprayed to kill mosquitoes that carry viruses like Zika and West Nile.

Naled has been registered for use in the U.S. since 1959 and is primarily used to control adult mosquitoes.

But it is toxic to other insects, birds, fish and even humans. It's classified as a severe skin and eye irritant and is harmful when ingested or inhaled.

Officials told WCIV this was the first time they have sprayed the pesticide from the air. The county normally sprays from the road.

They say they gave residents plenty of warning with a newspaper announcement on Aug. 26 and a Facebook post on Aug. 27.

The county administrator did apologize for the incident, telling The Charleston Post and Courier, "I am not pleased that so many bees were killed."

But residents are looking for more than an apology.

A bee activist group called started a petition and a hashtag to end Naled spraying in the county.

There are many chemical-free alternatives to pesticides that can help repel mosquitoes. To learn more about these methods and other information on pesticides, visit NoSpray.org.