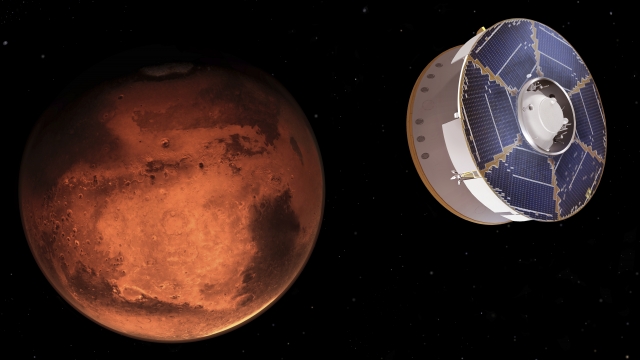 SMS
'Perseverance' Rover To Land On Mars Thursday
By Newsy Staff
By Newsy Staff
February 17, 2021
The rover will search the Red Planet for potential evidence of past life and will also gather samples. It will return to Earth after 10 years.
SHOW TRANSCRIPT

In just one day, NASA's Perseverance rover will attempt to land on Mars in one of the most highly anticipated space missions.

The rover will search the red planet for potential evidence of past life and will also gather samples. It will then return back to Earth after 10 years.

"We're looking for biosignatures. This is signs of past microbial life actually being on Mars. So, this is really exciting," said Nina Lanza, who is the team lead for the Space and Planetary Exploration at Los Alamos National Lab. "It's not just environments for life, but rather life itself. It could be something morphological, you know like a fossil, but it's probably going to be more likely something that will be chemical or mineralogical that we're looking for."

To give you a little insight, tomorrow the space craft will enter a seven-minute phase called the entry, descent and landing sequence, also known as "EDL."

Make sure you tune in to Newsy to watch the landing. We will have live special coverage at 3:00 Eastern tomorrow. You can catch the landing on Mars wherever you watch Newsy.