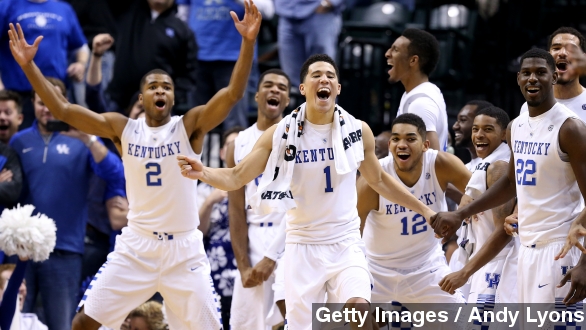 SMS
Perfect Season For Kentucky? Weigh The Stats First
By Jay Strubberg
By Jay Strubberg
February 17, 2015
The Wildcats are on an historic run toward the first perfect season in college basketball since 1976. But there's reason to be a bit skeptical.
SHOW TRANSCRIPT

A roster stacked with NBA prospects, absolute dominance and murmurs of a perfect season: the Kentucky Wildcats are clearly the odds on favorite to win the national championship.

But, before you pencil them in to run the gamut and take the NCAA title come tournament time, you might want to consider all the angles first.

They have incredible talent, size in the paint and a defense allowing fewer points than any other team in college basketball except Virginia.

"They might be the best defense of the modern era. ... We're seeing some history here," USA Today sports writer Nicole Auerbach said.

"Kentucky has four lottery picks, at least. So, league is down. ... They can play poorly and, because of their depth and their defense, they can still win games on the road, in their league without playing at their best," Sports Illustrated writer Seth Davis said.

Now, the Cats remaining schedule until the tournament is all SEC play — which is pretty weak by comparison. Outside of UK, Arkansas is the only other SEC team that cracks the AP Top 25. And this is where skepticism for that 40-0 season starts to creep in.

John Calipari's bunch has certainly knocked off a handful of ranked opponents including Louisville, North Carolina and a 32-point blowout of Kansas. But they really haven't been tested against the cream of the crop. (Video via Kentucky TV)

Not against Virginia's smothering defense or Gonzaga's high-scoring offense.

No match-ups against other powerhouses like Duke or Wisconsin. And, odds are, that will change in the later rounds of the NCAA tournament.

It's one reason a USA Today sports writer boldly says Kentucky is doomed to fail.

"This is team that, so far, hasn’t had to take a punch from a worthy adversary. Are the young Wildcats ... ready to fight in a tough game after not having been in a situation against a team that knows it can get a win?

Plus, the Wildcats barely squeezed by unranked Ole Miss and Texas A&M in back-to-back overtime thrillers at the turn of the new year, showing the team is vulnerable at the very least.

Let's also not forget how rare it is to complete a perfect season. The 1976 Indiana Hoosiers were the last team to pull it off — and that happened before the tournament field expanded to 64 teams.

If the Wildcats do end up going flawless to the finish, not only will the team achieve legendary status, but the school will benefit immensely. A writer for Forbes says, on the low-end, Kentucky could make around $4 million in revenue.