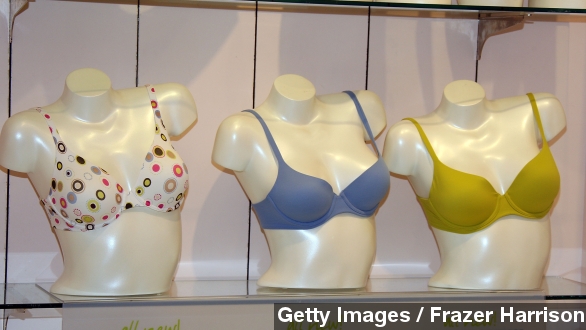 Researchers found "no aspect of bra-wearing" contributed to a higher rate of breast cancer. But why did people think that in the first place?

Could wearing a bra increase your risk of getting breast cancer?

Researchers at Seattle's Fred Hutchinson Cancer Research Center were prompted to study the issue after "lay media" suggestions the undergarment traps lymphatic fluids in the breast, impeding the removal of waste and toxins which could cause cancer.

According to Time, that perception most likely comes from a 1991 study that found younger women who didn't wear bras had a lower risk of breast cancer.

"The authors were quick to attribute that to more obvious, well-established risk factors like obesity. Thinner women with smaller breasts, after all, are those most likely to go braless."

According to the Los Angeles Times, this latest study, which studied more than 1,500 postmenopausal women both with and without a history of breast cancer, found "no aspect of bra-wearing" was positively linked to breast cancer rates.

"Not cup-size, not preference for soft-cup vs. underwire, not the age at which bra-wearing was initiated or the duration of daily bra-wearing."

Uplifting news for the bra-wearers among you, which is apparently nearly all women.

The researchers found at least 75 percent of women wear a bra for at least eight hours per day. In fact, researchers didn't include a control group of women who didn't wear bras at all because they could only find one such woman among their subjects.

This isn't the only common misconception about breast cancer risk. Susan G. Komen for the Cure listed several other factors that don't increase breast cancer rates, including:

The study was published Friday in the journal Cancer Epidemiology, Biomarkers & Prevention.

Newsy's resident expert on cat videos, Nathan spends half his day scouring the web for weird news and videos and the other half laughing at the fact that that is his job. Originally from London, he carefully hides his British accent. @nathangiannini