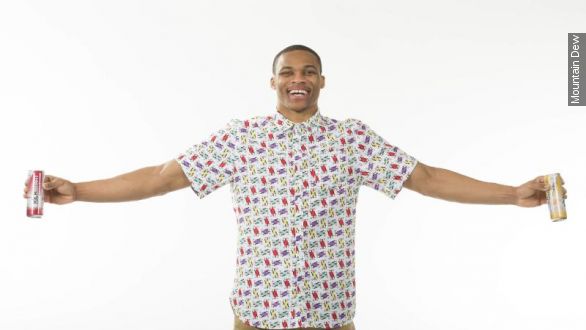 The NBA is going to see a lot more green — in the form of both money and soda.

The NBA announced a new deal with PepsiCo Tuesday. The food and beverage company is now the NBA's "exclusive food and beverage partner," bringing an end to the league's nearly 30-year relationship with Coca-Cola. (Video via PepsiCo)

Specifics have yet to be announced, but Fortune reports the PepsiCo deal is worth "significantly more" than the Coca-Cola partnership.

The deal gives PepsiCo even more sports league exposure. The company is an official sponsor for the NFL, MLB and the NHL and boasts deals with NASCAR drivers. The NBA deal also covers the WNBA, NBA Development League and USA Basketball.

Pepsi has had a relationship with NBA players prior to this new deal, using stars like Russell Westbrook and Kyrie Irving to push its products.

But, unlike PepsiCo's strategy in other leagues, it's flagship soft drink Pepsi won't be the main focus of this sponsorship. It's putting the Mountain Dew brand front and center, likely replacing Coca-Cola's Sprite exposure. Aquafina, Brisk, Doritos and Ruffles will also see significant face time.

Coca-Cola won't be completely bowing out of the NBA though. It's still got partnerships with big names like LeBron James and Derrick Rose. (video via The Coca-Cola Company)

Monday wasn't a total loss for Coca-Cola either. While the NBA is a much more popular league, Major League Soccer announced its new sponsorship with Coca-Cola, ending PepsiCo's nearly 20-year-long relationship with that league. (Video via National Geographic)