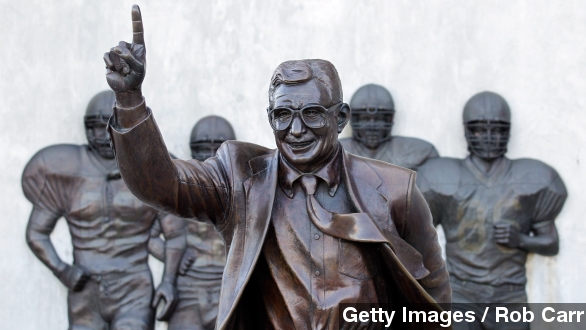 SMS
People Want Paterno Statue Back At Penn State, Poll Finds
By Matt Moreno
By Matt Moreno
February 11, 2015
A Quinnipiac University poll found that 59 percent of those surveyed were in favor of bringing the once-prominent Joe Paterno statue out of hiding.
SHOW TRANSCRIPT

Joe Paterno now has his wins back, but not his statue at Penn State University.

But according to a new Quinnipiac University poll, the locals want the statue back.

The poll found 59 percent of the 1,023 Pennsylvania adults it surveyed believe Joe Paterno's statue should return to Penn State campus in State College. Just 25 percent were opposed to it.

Here's all that remains where the statue once stood outside Beaver Stadium on campus.

Paterno was fired from the university in November 2011 after several child abuse allegations arose against assistant football coach Jerry Sandusky. (Video via WPXI)

Sandusky was ultimately convicted on 45 counts of sexual abuse. An investigation detailed in the Freeh report found Paterno might have been involved in covering up the abuse.

After the allegations and cover-up came to light, the statue was a source of constant controversy.

Critics of Paterno and his supporters exchanged words in front of the statue in this New York Times documentary:

"Keep your hands off me. That's called assault."

The NCAA vacated 111 of Paterno's wins in July 2012, and his on-campus statue came down days later. It's since been hidden in an undisclosed location. (Video via ABC)

When Penn State decided to officially remove the statue, university President Rodney Erickson called it a matter of public safety.

"Coach Paterno's statue has become a source of division and an obstacle to healing in our University and beyond. ... Were it to remain, the statue will be a recurring wound to the multitude of individuals across the nation and beyond who have been the victims of child abuse," wrote Penn State University President Rodney Erickson in a statement on the university's website.

But now, more than three years after the head coach died, support for the statue seems to be growing.

In April 2014, there was an effort underway for a new Joe Paterno statue in downtown State College. Organizers projected a completion date of November 2015.

In January, the NCAA restored JoePa's 111 wins it originally stripped, making him, once again, the winningest college football coach in NCAA history and further repairing Paterno's image in the record books.

The assistant director of the Quinnipiac University poll said: "It appears time heals all wounds and legends get a second chance. Joe Pa's tarnished image may never be totally repaired, but Pennsylvanians seem to be in a forgiving mood."