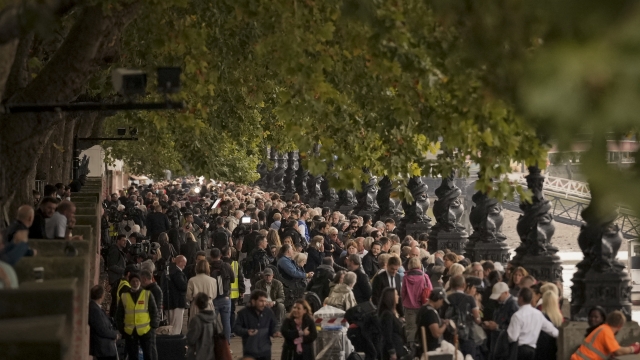 SMS
People From All Over The World Are Waiting In A Queue To See The Queen
By Luke Hanrahan
By Luke Hanrahan
September 14, 2022
Thousands — some from far away — have begun to line up in a queue to view the queen lying in state to say goodbye.

In a moment of symbolic unity, Prince William and Prince Harry walked side by side behind the Queen's coffin as it left Buckingham Palace.

Along with King Charles and other members of the Royal Family, they walked through the streets of London to Westminster Hall where the Queen is lying in state.

The sight of the brothers together, walking behind the coffin, evoked poignant memories of their mother Diana's funeral almost exactly 25 years ago.

Thousands turned out to pay their respects.

Some traveled from far away just to catch a glimpse of the coffin.

“I’ve come here today to represent the family, because the queen to me has been a constant in my life, I won’t say how old I am — five generations and she means so much to me and my family," said Debbie Bowland, who was in the lying-in-state queue.

“I’m here to be part of what is a moment of great magnitude. We’re seeing history in the making. The queen was a phenomenal person," said Travis Sterling, who was waiting in the queue to see the queen's coffin.

"You feel the atmosphere, it’s the people, it’s the fact that everyone has come together for this month with Big Ben chiming just knowing she’s going past, just to be here is special," said Allison Wilkins, waiting in the queue.

"I feel a deep sadness. When I forget for a few minutes, when I remember it floods over me again," said Barbara Townsend, waiting in the queue.

The queen’s body will lie in state for the next four days.

It's an opportunity for millions to say farewell to Britain’s longest-serving monarch. The route of the queue is expected to reach up to 10 miles long. Wristbands are denoting their position in line and some have prepared to wait overnight.

Others, like Joanne Herman, arrived at 4 o'clock this morning.

"I’m queuing here with my husband today because she meant a lot to everybody, it’s just really sad. I think it’s actually hit so many people in ways, myself included, in ways they couldn't even imagine," said Herman.

People from all over the nation and across the globe are waiting to say goodbye.