People Under 40 Create Huge Waste By Not Fixing Gadgets 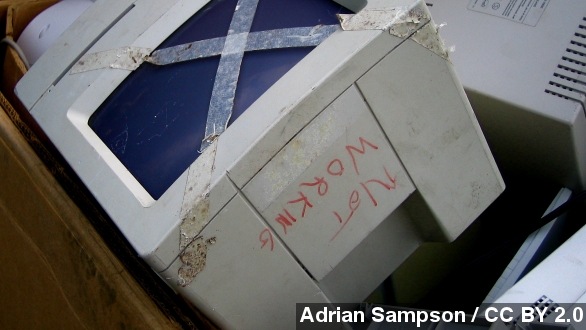 A professor warns that people younger than 40 are part of a "lost generation" that doesn't know how to fix electronics.

Cracked cellphones, glitchy game consoles and temperamental computers. You know where most of that stuff, which probably could've been fixed, will likely end up?

The trash, then on to a landfill.

And according to Danielle George, professor of radio frequency engineering at the University of Manchester, we throw away our electronics because,well, we don't know how to fix them.

Specifically talking about people under 40, George told The Telegraph: "We've got a lost generation that has grown up with factory electronics that just work all of the time. ... Because they don’t break we just get used to them. ... When they do we throw them away and buy something new."

It's kind of hard to take that as an insult when I'll admit I needed help setting up a DVD player. So ... yeah. George might have a point here.

A writer for CNET jokingly admits when he saw his friend fix a DVR he felt he was "in the presence of Leonardo da Vinci." But what if it hadn't been fixed — would it have been trashed?

It's likely. According to DoSomething.org, a site aimed at social change, the world produces between 20 million and 50 million metric tons of electronic waste a year, and it's one of the fastest-growing types of waste in the U.S.

According to this graph from the Electronics TakeBack Coalition, the amount of e-waste generated in the U.S. from 2000 to 2012 nearly tripled.

Back to Danielle George. She further explained her perception to The Independent, noting: "We take the light bulb for granted because how often do the light bulbs go out? People used to tinker with cars a lot more than they do now, as we tend now to take them to a garage. But before most people knew how to change oil."

The CNET writer chalks it up to a change in mindset, saying: "These days we (we, the young, I mean) are rather more interested in the ends than the means. ... We want instant gratification."

But now in an attempt to reverse that, George encourages her students to tinker or hack their electronics — leading Anne Perkins of The Guardian to hail the professor as a hero.

And Perkins isn't the only one who thinks so. This year George will host The Royal Institution's Christmas Lectures entitled, "Sparks will fly: how to hack your home."

"Basically what we're talking about is using the sparks of your imagination and some 21st century tinkering and some very simple objects and let's see what we can do with those objects," George explains.

The idea is to show the audience different ways to, say, put the lights on a timer using a motor, cellphone and/or a light bulb. George will begin the lectures Monday evening, and they'll run through Dec. 31 on the BBC.