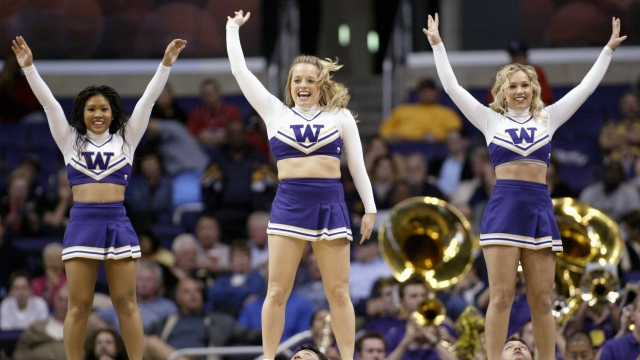 SMS
People Tore Apart This College Cheer Team's 'How To Look' Guidelines
By Ryan Biek
By Ryan Biek
April 28, 2016
Some have argued the guidelines sexualized women, and others say they implied minorities were less desired.
SHOW TRANSCRIPT

After significant backlash, the University of Washington pulled an infographic advising women on how to look and dress for cheer and dance team tryouts.

On Monday, the cheerleading squad posted a picture to its Facebook page of a thin, blonde, Caucasian woman posing in a sports bra and spandex shorts. There were guidelines for makeup, hair, body type and attire.

Of course, the social media backlash immediately followed, and the post was removed the next morning. Some argued the guidelines implied minorities were less desired. Others claimed the graphic sexualized women too much.

But if you thought the University of Washington's cheer team is the only one giving suggestions like these, you'd be wrong. A similar infographic was posted in March by the school's rival, Washington State University.

Cheerleading has struggled with claims it treats women as objects, but some say measures like Title IX have helped it shed most of that stigma.

Historians have noted female cheerleaders in the 1950s were meant to represent the "ideal of womanhood" and do little in terms of athletics.

But some say the acrobatic stunts and televised competitions seen today make cheerleading much more of a sport in its own right.

The University of Washington said it made the infographic to answer common questions about tryouts.

But in a statement obtained by The Seattle Times, UW said it "determined that some of the details and descriptions provided were inconsistent with the values of the UW spirit program and department of athletics."

It's unclear if the university had an infographic advising male cheerleaders how to look and dress.

This video includes clips from the University of Washington and Varsity Spirit and images from The Library of Virginia and Getty Images.