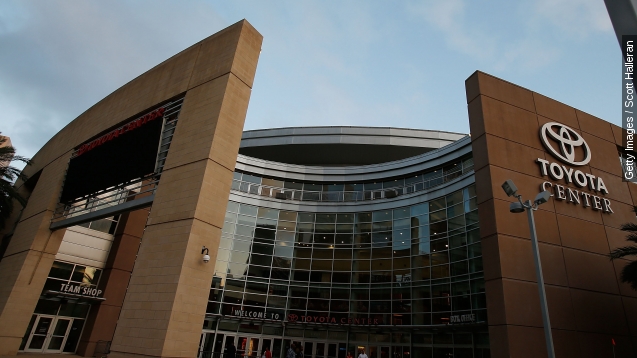 Storms and subsequent flooding have been pounding the Great Plains region of the country, and in the most extreme cases, even leading to death. (Video via Instagram / jose_reyna_)

Saturday, heavy rain led to massive flooding in Texas. It was so bad in Houston, that at 4 a.m. Tuesday, people were still stranded at the Houston Rockets stadium.

Where they say they still had to pay for the popcorn that had gone stale.

Even public transportation in the city was at a standstill. Tuesday morning, Metro had suspended all of its rail and bus services until flooding conditions improved.

One woman posted to YouTube she was stranded in a parking lot, saying in the video description there were cars underwater. She told us she has since moved to higher ground.

"Oh my gosh, people, cars are under the water! This is unreal ... This is what's happening in Texas right now," YouTube user Karmelita Straight said in a video.

"Right now I'm in downtown Houston, you can look here and see the downtown skyline. ... Some of the lights that are normally illuminating the foot trails are actually underwater ... we're still seeing that water rushing in ... Anything below this level is completely covered in water," the KTRK reporter said.

The National Weather Service's rain gauges had measured between 6-11 inches in Harris County, where Houston is located. There was a Flash Flood Emergency alert for a portion of the county that expired Tuesday morning.

The Weather Channel says the flooding could last for weeks, especially since more rain is heading to the already drenched region.

And to make matters worse, residents also had a tornado to worry about. According to Houston's KPRC, hundreds of people's homes were destroyed when a tornado struck an apartment complex in the city.

But Houston isn't the only Texas city to see devastation. The flooding continued across the Lone Star State. Governor Greg Abbott viewed floodwaters by air. In Wimberley, Texas, 350 homes had been washed away. In all, Abbot declared a state of disaster in 24 counties on Monday.

Local media outlets say much of Houston is impassable.