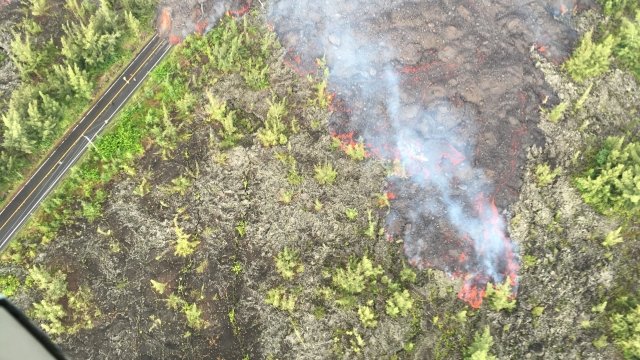 SMS
Some People Stranded As Lava Blocks Off Access To Parts Of Hawaii
By Katie Cammarata
By Katie Cammarata
June 3, 2018
As of Sunday morning, at least 87 homes had been destroyed since the Kilauea volcano's spike in activity began a month ago.
SHOW TRANSCRIPT

Lava from Hawaii's Kilauea volcano has blocked off access to a few areas on the Big Island, reportedly leaving almost a dozen people stranded.

Hawaii officials told CNN that some people stayed in the area and now don't have power, cell reception or county water.

On Thursday, the Hawaii County Civil Defense Agency issued a mandatory evacuation order for residents in one neighborhood on the eastern side of the island. They had 24 hours to leave or would face arrest and be held responsible for any costs of rescue operations. The evacuation order also said that people who didn't leave did so at the risk that emergency responders may not be able to respond.

On Friday and Saturday, the Hawaii County Civil Defense Agency warned residents of other nearby areas to evacuate or "risk the possibility of being isolated."

As of Sunday morning, at least 87 homes had been destroyed since the Kilauea volcano's spike in activity began a month ago. There are a couple of shelters where displaced residents can stay.