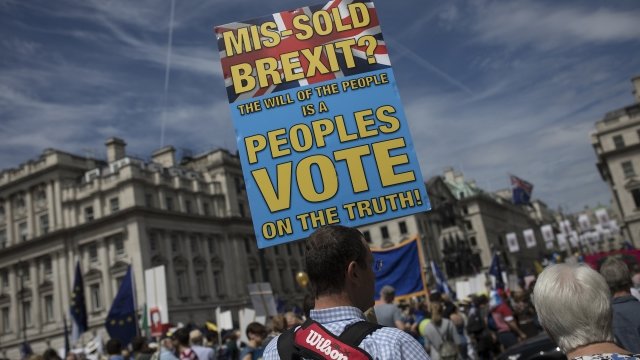 Organizers of the "People's Vote" march in London say at least 100,000 people rallied to call for a public vote on a final Brexit deal.

The move for the U.K. to leave the European Union was originally put to a vote and barely passed, with 51.9 percent for and 48.1 percent against.

Prime Minister Theresa May is still negotiating a divorce deal with the EU. Now on the two-year anniversary of the vote, pro-EU protesters want Parliament to let the people vote on an exit deal. If they don't approve it, People's Vote organizers say the U.K. should stay in the bloc.

The rally happened on the same day Brexit supporters marched in London. The U.K. is set to leave the EU in March 2019.