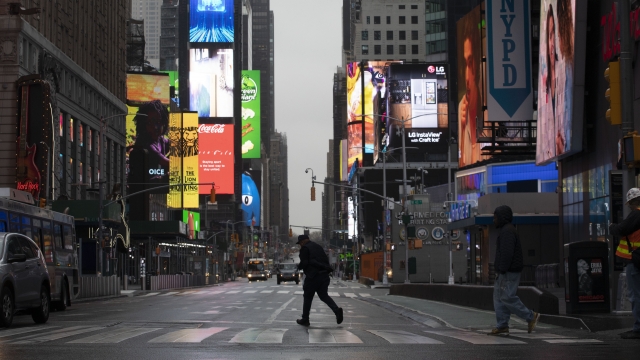 By Katherine Biek
March 25, 2020
Tens of thousands of people in New York City have tested positive for the coronavirus, making it the epicenter of the virus in the U.S.
SHOW TRANSCRIPT

The White House wants every person who's recently left New York to self-quarantine for 14 days.

"We remain deeply concerned about New York City and the New York Metro area. ... This will be very critical that those individuals do self-quarantine in their homes over these next 14 days to make sure they don’t pass the virus to others," Dr. Deborah Birx said.

Tens of thousands of people in the state have tested positive for the coronavirus,and New York City is now considered the epicenter of the virus in the U.S.

"The rate of cases, the rate of new infections is doubling about every three days. ... One of the forecasters said to me, we-- we're looking at a freight train coming across the country. We're now looking at a bullet train because the numbers are going up that quickly," New York Gov. Andrew Cuomo told reporters.

New York Gov. Andrew Cuomo already ordered all nonessential businesses to shut down in the state and told residents to stay home.

But he warned that hospitals aren't equipped to handle the growing spread of the coronavirus — estimating that New York will need as many as 140,000 hospital beds in the coming weeks to handle patients. It currently has about 53,000. Cuomo also said the state will need 30,000 more ventilators.