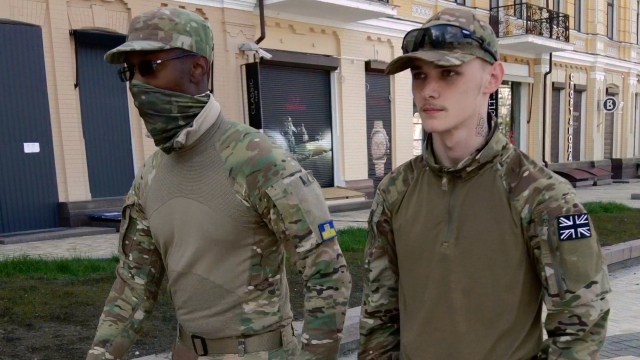 Newsy met two young men in Kyiv — One from the U.S. and the other from the U.K.

Newsy met two young men in Kyiv — One from the U.S. and the other from the U.K. They're new wartime buddies at a crossroads, willing to share their story — one anonymously, the other using his real name, Alfie Wheeler.

"We've killed people. Yeah. This is war," Wheeler said. "This is what you do."

NEWSY'S JASON BELLINI: Have you lost people that you fought alongside?

ALEX JONES: Yeah, they were dear to me. They were a part of my squad.

ALFIE WHEELER: Yeah, I've already lost someone. When we was under heavy fire, he took a bullet to the neck and it hit the artery.

It's impossible to verify the specific details of these young soldiers' accounts, though Jones showed Newsy photos and videos of what he's witnessed, including the brutal urban combat against the Russians in Kyiv's suburbs.

"If the foreign legion wasn't made, Kyiv, we'd be paying in rubles right now. There would be a Russian parade going through all these streets right now if a foreign legion wasn't made," Jones said. "In a nutshell, we bought time for the Ukrainian army. Let's just put it like that," Jones said. "Do you know how close Russia was to conquering Kyiv? A few more blocks and they would've taken the capital. The legion held the line and pushed them back. The legion held the line and bought the Ukrainian army time to gather up and push them back."

The legion declined to comment on that characterization and does not verify soldiers in its ranks.

Most of the photos Jones shared are too gruesome to show here. He says that, in Irpin, he got frostbite, received medical treatment and then the legion told him to go home.

But Jones did not leave Ukraine. He wanted to get back in the fight. In Lviv, he met Wheeler. The two of them hopped a train together to a station in Kyiv. Their plan was to join the Ukrainian offensive in Kharkiv, in the east.

Newsy met Jones and Wheeler the day before they planned to head to the front lines.

BELLINI: What about your parents, what do they think of this? They must be worried about you.

JONES: They don't know that I'm here, to be honest.

WHEELER: They might think I'm doing a stupid thing and I've got a death wish, but I don't. I want to try and do the right thing. I want to try and help out as much as possible. However, I may be stuck in a trench for two weeks or I'm on the front line killing Russians.

The plan was for them to be picked up from a hostel in Kyiv and early the next morning, head to the front line.

JONES: Ukraine is going to be defended to my last dying breath. And that's what I'm going to do. That's why I'm here.

The next day Jones joined the offensive in the east to take back Kharkiv from the Russians. But in a call the next week, there were hints of disillusionment with his new commander.

And then, the fog of war settled in. He said that Wheeler had joined a different unit, further south and was missing in action.

JONES: He was killed somewhere in the Donbas.

BELLINI: And how did you find that out?

JONES: A friend of a friend.

But Whatsapp messages sent to Wheeler showed they were received and it was increasingly apparent that Wheeler was not dead.

In fact, he had left Ukraine. A Ukrainian source, who checked the border logs, told Newsy that, rather than going to the front, Wheeler crossed into Poland the day after we met him and never returned.

Such mysteries surrounding the movement of foreign fighters in this war are not uncommon.

Another foreign fighter is C.J. Darton. He's a bomb tech from the U.K. who once crossed paths with Wheeler and says that the confusion over his whereabouts is pretty typical.

BELLINI: So some people just may never be heard from again.

As for Jones, Newsy met up with him once more. After two weeks at the front, he left his unit and passed again through Kyiv. The final straw for him, he says, were his orders to find land mines.

JONES: I was in the dirt. I was on my belly. They gave me a gerber kit, like a multi-tool knife to poke the ground of land mines. ... I would pick them up, I'd unscrew the cap, get the detonating pin, pull it out.

BELLINI: So did you want to be doing mine clearing?

BELLINI: When I interviewed you before, you said you're not going home, you're going to stay till the end. What changed?

BELLINI: Do you think this is your last war?

Jones had a train to catch. But war's magnetic pull would prove too strong. Just a few days later, Jones sent a message, sharing a photo of what appears to be a newly signed foreign legion contract and a video of the front lines.