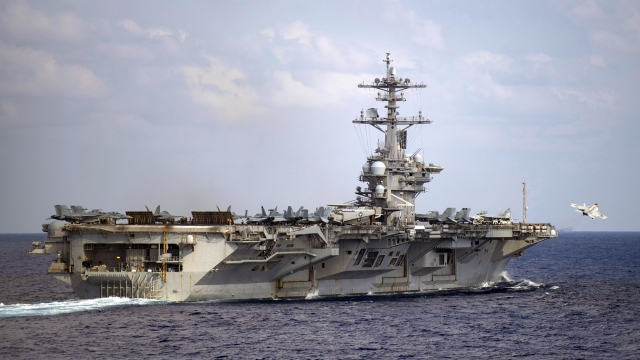 SMS
Pentagon To Investigate Navy's Policies To Prevent Spread Of COVID-19
By Bailey Vogt
By Bailey Vogt
May 12, 2020
The Pentagon IG said it wants to evaluate the Navy's pandemic measures.
SHOW TRANSCRIPT

The Pentagon's internal watchdog says it will investigate the Navy's response to the coronavirus aboard its ships. The Navy has been in the spotlight after hundreds of sailors onboard the USS Theodore Roosevelt contracted the virus and its captain was relieved of duty. However, the Roosevelt was not included in announcing the investigation.

The Department of Defense Inspector General informed the Navy of the investigation in a memo dated Monday. They want to see if policies are being followed to prevent the pandemic's spread.

The investigating body said: "This evaluation is to determine whether the Navy has implemented policies and procedures to prevent and mitigate the spread of infectious diseases, such as coronavirus-2019 (COVID-19), on ships and submarines. In addition, we will determine whether mitigation measures that are effective in preventing the spread of COVID-19 were implemented across the fleet."

The investigation comes after the Navy faced backlash for ousting USS Roosevelt Capt. Brett Crozier, whose letter to his supervisors pleading for help became public. Then-acting Secretary of the Navy Thomas Modly was forced to resign after he fired Crozier.

Another outbreak has been reported on the USS Kidd destroyer. Overall across the Navy, there have been about 2,000 COVID-19 cases, according to the Navy Times.