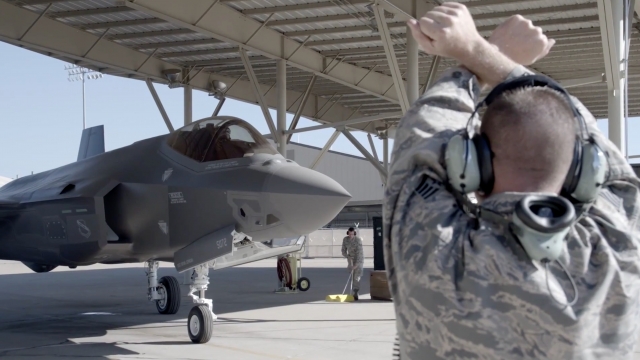 SMS
The Pentagon's Weapons Tester Is Concerned About The F-35 Fighter Jet
By Melissa Prax
By Melissa Prax
August 27, 2016
Although the U.S. military's new F-35 jets have a while before they enter the final trial phase, the Pentagon's head tester has some concerns.
SHOW TRANSCRIPT

Apparently the U.S. military's development of the F-35 fighter jet is hitting some turbulence.

At least that's what the Pentagon's head weapons tester Michael Gilmore said in a memo that Bloomberg obtained.

The F-35, sometimes called the "most expensive weapon ever built," will have different versions for the U.S. Navy, Marines and Air Force. It's meant to replace older jets.

Both the Air Force and the Marines have approved their models for combat — but only in limited use.

There's still two more years before the F-35 will go into its final test phase and then an additional year until it could go into mass production.

By that time, the Pentagon will have put $400 billion into the project.

But according to Gilmore, the project is at a "substantial risk" of not meeting that timeline due to a handful of problems, including the lack of a working gun.

The Bloomberg report is just the latest in a project that's been plagued by problems, ranging from software malfunctions to tires that couldn't handle the force of a landing.

"It's the wave of the future, and it's where we need to go in terms of fighting tomorrow's war," Maj. Jayson Rickard said.

The Department of Defense has admitted to challenges with the jet's development in the past. In February, the department cited over 400 problems with the jets, but said that number actually wasn't that high for this type of project.

And some officials have said some of the jets could potentially be deployed within a year.