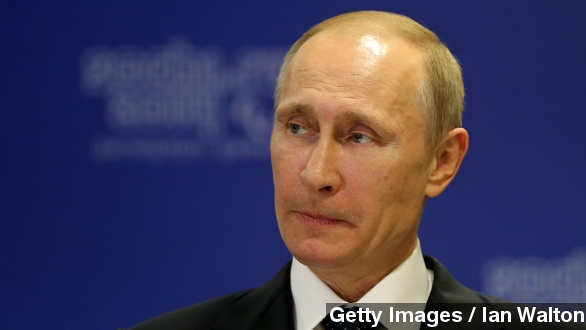 Talk about your every move being scrutinized. A Pentagon report obtained by the media shows at least one government think tank believes Russian President Vladimir Putin has Asperger's syndrome.

USA Today detailed the report, which the outlet says it obtained through open-records requests.

The report says Pentagon officials first began essentially scrutinizing Putin's body language in 2000 when he rose to be Russia's prime minister. With no ability to do a brain scan, there likely won't be anyone proving or disproving the theory.

But the researchers wrote in 2008 Putin was their focus because several nonverbal movements "so clearly [reveal] that the Russian president carries a neurological abnormality."

The report also said Putin often appeared on the defensive in large social settings and, "If you need to do things with him, you don't want to be in a big state affair but more of [a] one-on-one situation someplace somewhere quiet." (Video via ABC)

Of course, while that might be a symptom of Asperger's, there are several other explanations that would line up with those symptoms. Like being shy.

Now, Putin's at times bizarre press opportunities have given him a bigger-than-life reputation worldwide that doesn't suggest a coy world leader. He's also the regular butt of jokes in American media.

You can't deny Putin is one powerful leader, and researchers wrote Putin seeks "extreme control" in the way he makes decisions. (Video via RT)

When Time made him the magazine's person of the year in 2007, it wrote, "The Russian president's pale blue eyes are so cool, so devoid of emotion that the stare must have begun as an affect, the gesture of someone who understood that power might be achieved by the suppression of ordinary needs, like blinking."

It should be noted the question of whether Asperger's truly is an autism spectrum disorder is a bit controversial in medical and educational circles. The American Psychiatric Association removed Asperger's from its latest Diagnostic and Statistical Manual.

One of the Pentagon researchers theorized Putin's neurological development was interrupted in infancy. The report was prepared by the Pentagon's Office of Net Assessment.