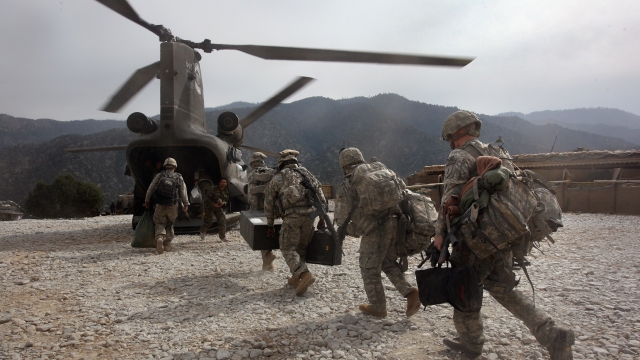 The Pentagon is reportedly drawing up withdrawal plans for U.S. troops in Afghanistan.

Defense officials told NBC plans are in the works in case President Trump suddenly orders troop withdrawals without warning military officials, like he did in Syria earlier this month.

The precautionary efforts are "prudent planning," one official said, while another said President Trump's approach to Syria is "a dress rehearsal" for what could happen in Afghanistan.

President Trump has increasingly pushed the troop withdrawal narrative he campaigned on in the 2016 election, despite harsh criticism for his decision to withdraw troops from Syria.

On Monday, President Trump told reporters, "I got elected on bringing our soldiers back home."

News of this precautionary plan follows Defense Secretary Mark Esper’s unannounced trip to Afghanistan to restart peace talks with the Taliban, after President Trump declared the negotiations “dead” in September.

At the time, a peace deal had been reached between the two that involved withdrawing over 5,000 American troops from Afghanistan. But President Trump cut off negotiations after the Taliban claimed responsibility for a suicide bombing in Kabul, which killed 20 Afghan civilians and one U.S. service member.

Esper says the objective in the renewed in discussions is still the same: to negotiate a peace deal between the Taliban and Afghan governments.

On Monday, Esper was questioned by reporters about the possibility of withdrawing all troops from Afghanistan. He responded by saying the missions in Afghanistan and Syria are very different.

Esper said: "Very different situations, very different adversaries if you will, very different level of commitment. Very clear policy direction on one." Esper added, "All these things should reassure Afghan allies and others they should not misinterpret our actions in the region in the recent week or so in regard to Syria and contrast that with Afghanistan."