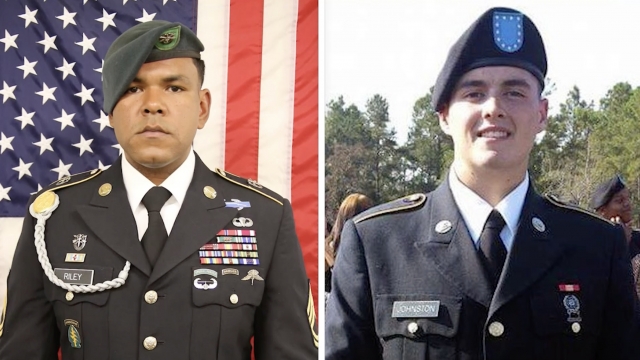 SMS
Pentagon Identifies 2 US Soldiers Killed In Afghanistan
By Katherine Biek
By Katherine Biek
June 28, 2019
According to the Pentagon, the two died Tuesday after sustaining injuries from small arms fire during combat operations.
SHOW TRANSCRIPT

According to the Pentagon, the two died Tuesday after sustaining injuries from small arms fire during combat operations in central Afghanistan.

About 14,000 U.S. troops are stationed in Afghanistan. Most of them are there as part of a NATO mission called Resolute Support, which is focused on training, advising and assisting Afghan forces fighting the Taliban.

Negotiators for the U.S. and the Taliban are set to resume peace talks Saturday in Qatar. It'll be the seventh round of direct talks between the two sides since October. After they last met in May, a U.S. chief negotiator said they were making "steady but slow progress."

Secretary of State Mike Pompeo had made an unannounced trip to Kabul one day before Riley and Johnston were killed. While there, Pompeo said his goal was to have a peace deal with the Taliban in place before the start of September.

The incident surrounding Riley and Johnston's deaths is being investigated. Their deaths bring the total number of U.S. service members killed in Afghanistan this year to at least 10.