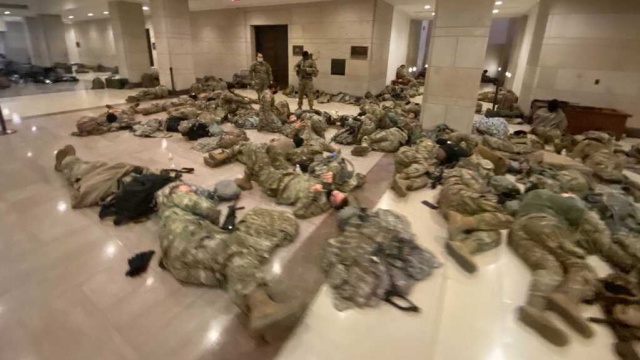 REED: “We’re in the Capitol visitors’ center right now, which is typically where people line up for tours. But right now it’s filled with members of the Army National Guard who are all on order to ... protect the Capitol after last week’s riots here. This is the hall where people typically go to visit Congress. And as you can see, hundreds of members of the Army National Guard as protection efforts on the Capitol are underway.”

“Those service members had been on a shift for approximately 16 hours. When we're carrying an arm, it's critical that we maintain control of that arm arm at all times, even if we are napping. And that's the easiest way, because it'll wake you up if someone's taking your weapon,” Joint Force Headquarters Command Sgt. Maj. Michael F. Brooks told Newsy.

The decision to arm the National Guard came hours before the House began debating the second impeachment of President Trump.

In an interview with Newsy, Maj. Gen. William Walker admitted this scene is exceptionally rare.

The Department of Defense does not normally use the National Guard in a law enforcement role. When the Capitol siege began last week, they were assisting with crowd and traffic control.

The Guard is effectively on standby to assist law enforcement, which authorizes them to open fire if they’re being threatened with weapons.

“They're authorized to defend themselves, first of all, and then come to the aid of others. So they if they -- if the police and law enforcement ask them to assist, they will. They are empowered to assist the law enforcement that they are supporting," Walker said.

In effect, that means the Guard could decide to take action, even make arrests -- even if another agency, like Capitol Police, does not.

There may be up to 15,000 National Guard troops in the Capitol during next week’s inauguration, and their orders are in effect until at least February.