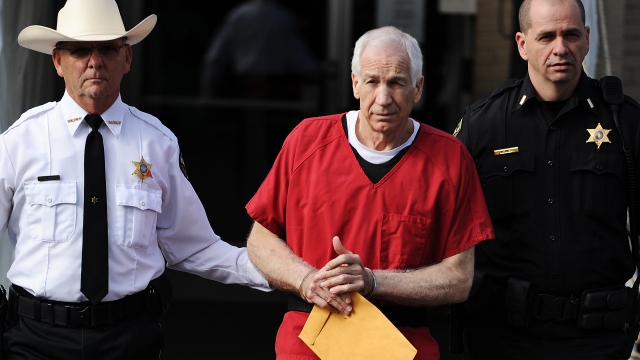 A university spokesperson told the Centre Daily Times Wednesday that an individual told University Police that Sandusky had sexually assaulted them at the Lasch Football Building between June 2000 and September 2010. The individual listed two counts of rape and two other counts of "sex offenses" in an incident report filed Tuesday. The spokesperson said "an investigation is ongoing," but declined to comment any further.

Sandusky was sentenced to at least 30 years behind bars in 2012 after being found guilty on a slew of charges related to the sexual abuse of 10 young boys. Earlier this year, the Pennsylvania Superior Court denied his request for a new trial but also ordered that he be re-sentenced. That's because Sandusky's sentence was based on a mandatory minimum sentence rule, something the state's Supreme Court deemed unconstitutional in 2015. Pennsylvania no longer imposes mandatory minimums for criminal trials.

Sandusky is scheduled to be re-sentenced on Nov. 8.