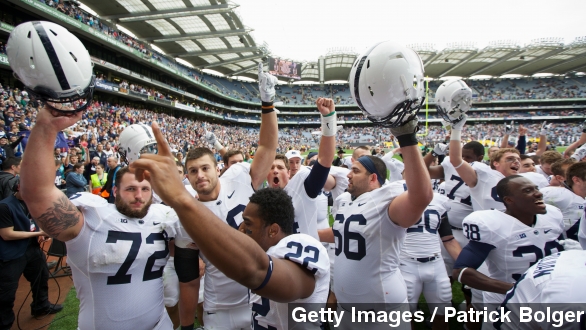 Thousands of students at Pennsylvania State University rallied in the streets Monday night in celebration of their college football team's bowl eligibility, which had previously been suspended as a result of the sexual abuse case involving former coach Jerry Sandusky.

Some headed to social media to express their reactions of the event. Others shared numerous photos and videos.

According to The New York Times, the university's football team was halfway through its four-season ban when the NCAA voted to immediately rescind the sanctions amid external pressures.

Those pressures include a report by former senator George J. Mitchell, who wrote the students and football team should not be responsible for the charges against Sandusky. He adds, "Student-athletes ought to be given the chance both to receive a quality education and be active in sports."

Chants at the rally included remembrance of now-deceased Joe Paterno, the revered former head football coach who was widely viewed as a protector of Sandusky and fired amid the scandal.

It was a very different picture three years ago, when Penn State students rioted in the streets and became violent amid the news of Joe Paterno's firing. Local media reported Monday's rally resulted in no damages or injuries. (Video via ABC)

But not everyone is so upbeat about the recent decision, calling to light the reasons why the ban was implemented in the first place.

Such as this headline from Bleacher Report reading, "NCAA Sending Wrong Message to Victims by Repealing Penn State's Sanctions."

Or this one from SB Nation: "NCAA's Penn State choices show it cares about power, not being right."

A writer from USA Today summed up the critics' point.

"The NCAA didn't put in sanctions in place for four years because that's how long it would take for Penn State to right the ship. It put them in place because Penn State had done the worst thing they could do as a university: Put the well-being of a football program ahead of everything — including protecting children from a predator."

The NCAA's decision also means all Penn State's scholarships will return next season. The school will still have to pay a $60 million fine, and 112 of the football team's wins remain void.

Jerry Sandusky is currently serving a life sentence in prison after his 2012 conviction on 45 charges of child sex offenses. The criminal cases of three men, including former Penn State President Graham Spanier, for allegedly protecting Sandusky are still pending.

This video includes images from George Chriss / CC BY 2.5 and Getty Images.