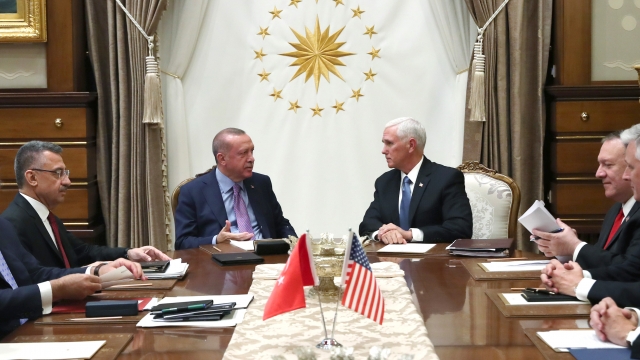 Vice President Mike Pence says the U.S. and Turkey have agreed to a cease-fire in northern Syria.

Pence met with Turkish President Recep Tayyip Erdoğan in Turkey on Thursday to broker the deal.

As for the sanctions imposed on Turkey: Pence says the U.S. does not plan to impose more sanctions and will get rid of the new sanctions once a permanent cease-fire is in place.

But Turkey's foreign minister says the agreement is "not a cease-fire," adding the country "will pause the operation for 120 hours in order for the terrorists to leave. ... We will only stop the operation if our conditions are met." One of the conditions is establishing a "safe zone" east of the Euphrates river.

Turkey launched an offensive against Kurdish forces over a week ago after President Donald Trump withdrew troops from Syria.