Pence Says The U.S. Will Not 'Decouple' From China 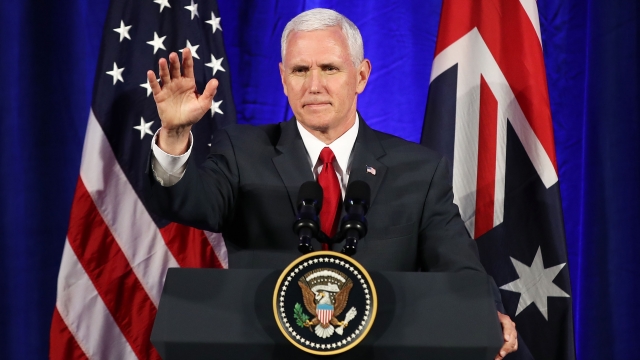 Vice President Mike Pence said the U.S. will not "decouple" from China and "will continue to seek a better relationship" with the country.

The vice president gave a speech on the U.S.' relationship with China at the Woodrow Wilson International Center in Washington, D.C., on Thursday.

Trade talks between the two countries are ongoing. The Trump administration has been back and forth with Shanghai on a trade deal for more than a year. And the ensuing trade war has affected both countries' economies. During his speech, Pence called on China to end unfair trade practices that he said have "taken advantage of the American people for far too long."

President Trump is hoping to get a "phase one" trade deal signed with Chinese President Xi Jinping at a summit in Chile next month. But not everyone is that optimistic. Republican Sen. Marco Rubio told CNBC he has doubts a deal will be reached with China. Meanwhile, Pence said the U.S. "will continue to seek a better relationship with China."

"And as we do so we will speak plainly," Pence said. "Because this is a relationship that both the United States and China have to get right."

He also brought up the protests in Hong Kong.

"Hong Kong is a living example of what can happen when China embraces liberty," Pence said. "And yet for the last few years, Beijing has increased its interventions in Hong Kong and engaged in actions that curtail the rights and liberties of its people. Rights and liberties that were guaranteed through a binding international agreement."

Pence said the U.S. stands with the protesters in Hong Kong, who have been demonstrating for months now. On Wednesday, Hong Kong's Legislative Council formally withdrew a controversial extradition bill that started the protests in the first place. But it's unclear if it will meet the protesters' other demands.