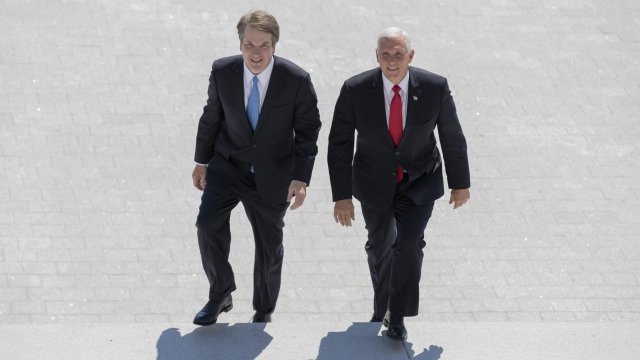 SMS
Pence Says He Hasn't Spoken With Kavanaugh About Roe v. Wade
By Ethan Weston
By Ethan Weston
July 11, 2018
You can probably expect to hear a lot about Kavanaugh's thoughts on abortion in the coming weeks.
SHOW TRANSCRIPT

Kavanaugh hasn't publicly expressed opposition to Roe v. Wade. He previously refused to give his personal views on the issue, but he did say he considered the ruling "binding precedent."

But there is still worry among abortion rights supporters about the future of Roe v. Wade now that Justice Anthony Kennedy is retiring. Kennedy was considered the court's swing vote for reproductive rights, and Democrats have made abortion rights a primary focus for the Kavanaugh confirmation fight.

That's because there are a number of court cases in lower courts right now that touch on the issue of abortion. Although the cases aren't about Roe v. Wade specifically, they could be made into broader abortion issues by the high court.

Abortion rights advocates also worry about one of President Donald Trump's campaign promises. He said he'd only consider Supreme Court nominees who were opposed to abortion rights, though Trump and his advisers say the president didn't ask Kavanaugh about the subject.

Expect to hear a lot about Kavanaugh's thoughts on abortion in the coming months. While he still might not give his personal views, he's likely to be asked repeatedly about his thoughts on Roe v. Wade.