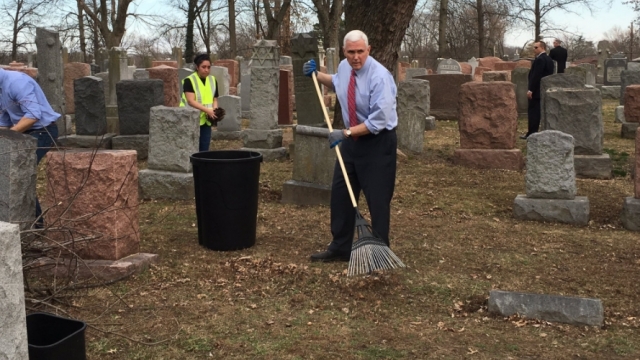 While visiting Missouri on Wednesday, Vice President Mike Pence made a stop at the St. Louis-area Jewish cemetery that was vandalized over the weekend.

"There is no place in America for hatred or acts of prejudice or violence or anti-Semitism," Pence said while visiting the Chesed Shel Emeth Cemetery in University City, Missouri.

Around 180 headstones had been knocked off their bases at the Chesed Shel Emeth Cemetery. Most, if not all, had been replaced by Wednesday afternoon.

Pence joined Missouri Gov. Eric Greitens and hundreds of community members in cleaning up the cemetery.

"The people of Missouri are inspiring the nation by your love and care for this place, for the Jewish community in Missouri. And I want to thank you for that inspiration for showing the world what America's really about," Pence told volunteers gathered at the cemetery.

The outpouring of support for the community didn't stop in Missouri.

Muslim activists started a crowdfunding campaign to help with the costs of repairing the headstones. It raised over $80,000 in 24 hours.

"The anti-Semitic threats targeting our Jewish community and community centers are horrible and are painful," Trump said while visiting the National Museum of African American History and Culture.

Trump had faced criticism for not speaking out against it sooner.

"He asked me on his behalf to personally thank all of of you. Thank you for standing up in the fight against anti-Semitism. And he said thank you for showing the people of the world that what happened here the other night is not who America is. It's not who Missouri is. This is who Missouri is. This is who America is," Greitens told the crowd before the cleanup.