Pence Defends US Embassy Move In Israel To Lawmakers There 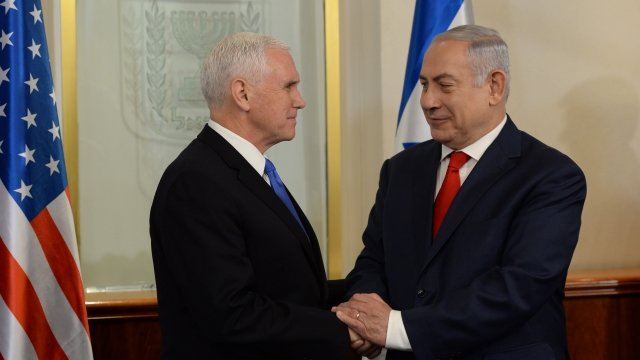 SMS
Pence Defends US Embassy Move In Israel To Lawmakers There

By Katherine Biek
January 22, 2018
Vice President Mike Pence confirmed the U.S. plans to open its embassy in Jerusalem by the end of 2019.
SHOW TRANSCRIPT

Speaking to Israel's parliament Monday, Vice President Mike Pence confirmed the U.S. plans to open its embassy in Jerusalem before the end of 2019.

This announcement comes after The New York Times reported Thursday the Trump administration wants to move the U.S. Embassy out of Tel Aviv faster than anticipated. Officials had estimated the move could take years.

While Pence spoke to lawmakers, several politicians were removed from the chamber for protesting.

The Joint List, an Arab-majority party in Israel's parliament, had vowed to boycott Pence's speech.