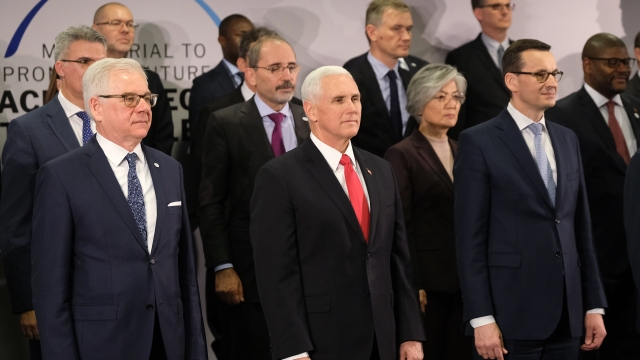 Vice President Mike Pence is in Warsaw, Poland, for the Middle East summit.

Vice President Mike Pence says the greatest threat to "peace and security" in the Middle East is Iran.

"Forty years ago this month, the mullahs seized control of that country. And every year since, they've supported terrorist proxies and militias — Hezbollah and Hamas; exported missiles; fueled conflicts in Syria and Yemen and beyond," said Pence.

He made those comments while in Warsaw, Poland, for the Middle East summit jointly led by the U.S. and Poland. His visit has largely focused on promoting the Trump administration's anti-Iran message, though Iran doesn't have a representative at the summit.

Pence encouraged allies to follow in the U.S.' footsteps and withdraw from the landmark 2015 nuclear deal. He said the deal didn't stop Iran from gaining access to "the world's deadliest weapons," it just delayed the process. He also accused some countries of getting in the way of U.S. sanctions against Iran.

Earlier this year, U.S. intelligence officials testified that Iran is still abiding by the terms of the agreement, but could be weighing pushing the boundaries.

The conference also comes as the European Union continues to work on boosting the Iran nuclear deal.

Iran's foreign minister called the summit "another attempt by the United States to pursue an obsession with Iran that is not well founded."