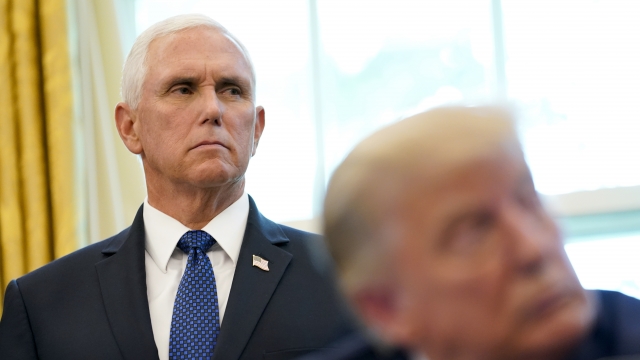 Vice President Mike Pence has canceled an appearance at a Montana fundraiser — days after the hosts were revealed to have shown support for the right-wing conspiracy theory group QAnon.

President Trump's re-election campaign said Pence's schedule made him unable to attend the Bozeman, Montana rally, but didn't give a reason why or if the appearance would be rescheduled.

The cancellation follows revelations this week that the hosts have supported QAnon, which believes a baseless conspiracy theory that influential government figures are part of a sex trafficking and pedophilia ring seeking to undermine President Trump.

The Associated Press reported Caryn and Michael Borland have both shared QAnon memes and tweets. They have also donated $220,000 to President Trump's campaign.

Also on the guest list were the chairwoman and co-chair of the GOP National Committee as well as a number of Montana Republicans. When asked about the QAnon ties — spokespeople for Sen. Steve Daines and gubernatorial candidate Greg Gianforte said they do not know the Borlands or what QAnon is.

State auditor Matt Rosendale, a candidate for Montana's only seat in the U.S. House, said he doesn't know what QAnon is because he, quote, "isn't focused on false conspiracy theories." The three Republicans and Pence are still slated to appear at another Montana event Monday.