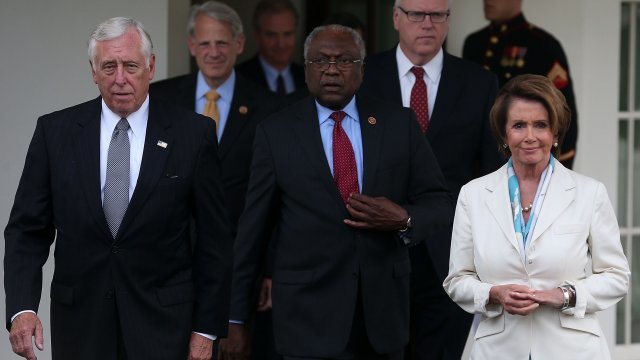 By Alexandra Miller
November 29, 2018
Minority Leader Nancy Pelosi clinched the Democratic nomination for speaker with 203 votes, but that's not enough for a win.
SHOW TRANSCRIPT

Minority Leader Nancy Pelosi took an important step to becoming the next speaker of the House come January, but Wednesday's preliminary elections may signal more divisions down the pike for House Democrats.

She may have scored a whopping 203 votes, but she needs 218 to become speaker. That means as of now, she wouldn't have the numbers to gain the speakership. But Pelosi's got more than a month to go to shore up support from opposing and reluctant Democrats.

Her biggest obstacle may be those who want to know when she's going to leave. Representatives like Seth Moulton, Tim Ryan and Kathleen Rice are going to be a tough sell, considering they're demanding a succession plan that Pelosi seemingly won't budge on.

Others say they won't support her because they told their constituents they wouldn't. In a statement after the vote, newly elected congresswoman Mikie Sherrill said, "Back in May, I made a commitment to the residents of NJ-11 that I would seek new leaders in Congress who were going to help us move forward on the priorities here in our district."

But don't count Pelosi out — especially since a Democratic challenger has yet to emerge. She'll spend the next month working to chip away at those who oppose her one by one.

Another positive sign for her: There wasn't opposition for either her No. 2 or No. 3. Congressmen Steny Hoyer and Jim Clyburn were unanimously elected as majority leader and majority whip, respectively. Pelosi's opponents reportedly suggested ousting either man to appease those who want new leadership. Given their unanimous wins, it doesn't seem the opposition was concerned with either man in particular. Maybe members aren't looking for new leadership across the board and are really only focused on the top.