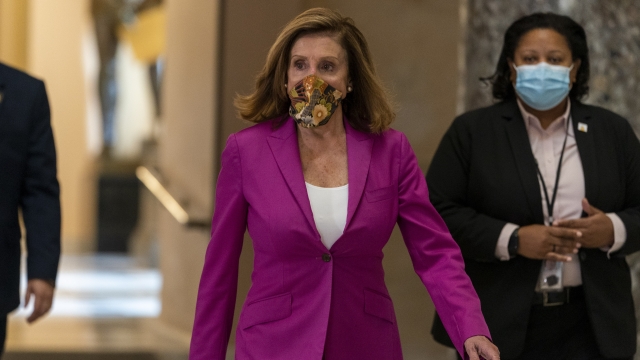 SMS
Pelosi Will Keep House In Session Until Coronavirus Aid Is Passed
By Newsy Staff
By Newsy Staff
September 16, 2020
Pelosi says she is "committed to staying" while President Trump urges GOP lawmakers to "go for the much higher numbers."
SHOW TRANSCRIPT

House Speaker Nancy Pelosi says she will keep the House in session until a coronavirus relief bill is passed.

In a call with House Democrats Tuesday, Pelosi said health and economic aid must be agreed on with Republicans before the House can adjourn.

Appearing on CNBC, she said, "We are committed to staying here until we have an agreement, an agreement that meets the needs of the American people."

Pelosi said that may mean staying past the currently scheduled end of session on October 2.

House Democrats and the White House have expressed interest in further aid for Americans but negotiations have stalled over how much and concerns by some Republicans over cost.

On Wednesday, President Trump urged Republicans to sign off on a larger package.

In a tweet, the president told GOP lawmakers to “go for the much higher numbers.”

Additional reporting by Andrew Taylor of the Associated Press