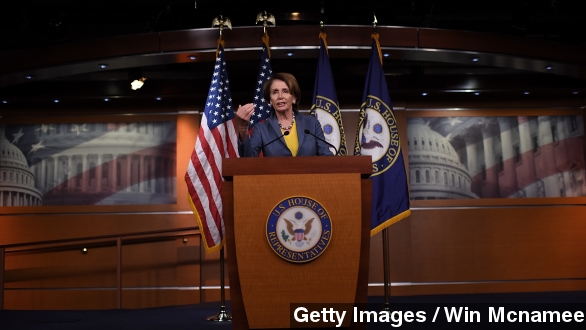 At 74 years young, House Minority Leader Nancy Pelosi isn't about to retire. And when one reporter asked if she'd considered stepping down following the Democratic defeat in the House, the 27-year Congressional veteran took offense.

PELOSI VIA C-SPAN: "What was the day that any of you said to Mitch McConnell when they lost the Senate three times ... 'Aren't you getting a little old Mitch? Shouldn't you step aside?' Have you ever asked him that question?"

Pelosi is, of course, referring to the 72-year-old Senate Majority leader-elect Mitch McConnell, whose party won the Senate earlier this month after suffering defeats three times in a row. Pelosi and House Democrats are on a similar three-time losing streak. (Video via CBS)

Later in the briefing, Pelosi mentioned she never made the cover of Time magazine despite becoming the first female Speaker of the House — as both McConnell and House Speaker John Boehner did when they took over their legislative chambers.

The implication of Pelosi's comments is obvious — female legislators face unfair, sexist questions about their age and appearance.

It's a perception Kentucky Sen. Rand Paul furthered last week when he questioned if Hillary Clinton, at 67, was too old to run for President — despite the fact that his father Ron Paul mounted his presidential bid at 77.

And a writer for The Washington Post sides with Pelosi, noting, "For women, barriers are still being broken, and there hasn't ever really been a huge space for powerful women of a certain age to be out front in leadership positions. ... Pelosi was trying to make a much broader point about women, saying she was on a 'mission for women on this score.'"

But The Post also points out male candidates do sometimes face questions about their age.

RONALD REAGAN VIA IPTV: "I will not make age an issue of this campaign. I am not going to exploit for political purposes my opponent's youth and inexperience."

Ronald Reagan faced scrutiny about his age after he first took office at 69. Age was also a factor for Republican candidates Bob Dole when he ran against Bill Clinton at the age of 73, and John McCain when he faced Barack Obama at 72.

And comments about age might have more to with partisan politics than gender — a recent Pew survey notes Democratic opposition to older candidates spiked in 2008 when McCain was running, then subsided as a Clinton candidacy approached.

As The New York Times puts it, "Voters often seem to work backward, rationalizing their views of the likely contenders rather than expressing a strong preference for a particular type of candidate."

Pelosi went on to add she will stay on as Minority Leader only as long as the Democratic caucus wants her to. She's poised to be reelected to the role without any serious challenge during the Democratic leadership elections on Nov. 18.