Pelosi Says House Will Draft Articles Of Impeachment For Trump 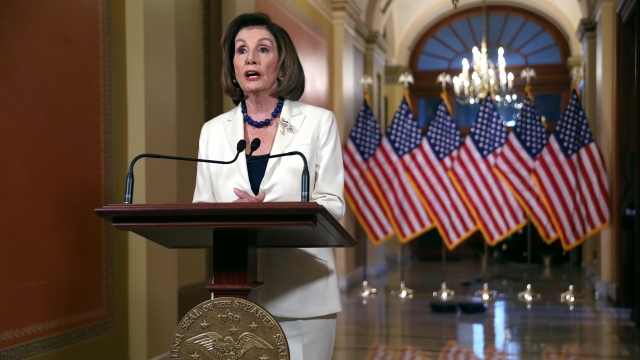 "His wrongdoing strikes at the very heart of our Constitution. ... Today I am asking our chairman to proceed with articles of impeachment," House Speaker Nancy Pelosi said.

Thursday morning, Pelosi made it clear that Democrats are moving forward with the impeachment of President Donald Trump.

"The facts are uncontested. The president abused his power for his own personal political benefit at the expense of our national security by withholding military aid and a crucial Oval Office meeting in exchange for an announcement of an investigation into his political rival," Pelosi said.

Pelosi's announcement came the morning after the House Judiciary Committee held its first impeachment hearing where lawmakers questioned a panel of four constitutional scholars. The Judiciary Committee set its second hearing for Monday. Pelosi said Democrats and Republicans will present all the evidence they've gathered during the impeachment inquiry.

President Trump responded to Pelosi's announcement on Twitter. He repeated his claim that his phone call with the Ukrainian president was "perfect" and said Democrats are trying to impeach him over nothing.

"If she paused and she actually listened to the hearing yesterday, and what a Democrat who did not vote for the president, who has studied the Constitution, who most at any time has been a witness for Democrats and Republicans, based upon his own ability as a scholar, that this is the weakest, thinnest impeachment in the history of America, " McCarthy said.

The speaker has not put a timeline on the proceedings. The committee chairs and staff will decide on what articles of impeachment to write up against President Trump. The Judiciary Committee will be responsible for approving the articles before sending them to the full House for a vote.