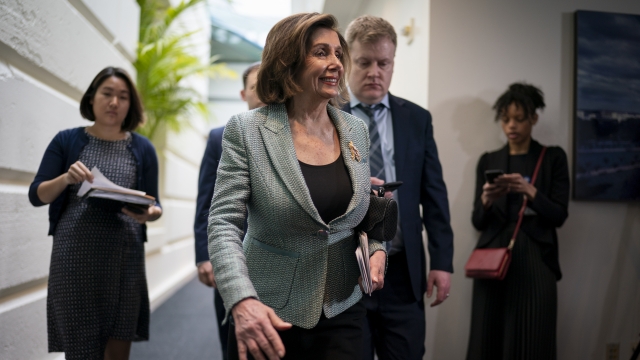 SMS
Pelosi Says Democrats Readying Their Own Coronavirus Relief Bill
By Katherine Biek
By Katherine Biek
March 11, 2020
This comes as the Trump administration is working with Congress on an economic stimulus package to help those impacted by the virus.
SHOW TRANSCRIPT

As the Trump administration works with Congress on a plan to provide economic relief to businesses and workers impacted by the coronavirus outbreak, House Democrats are coming up with their own plan to do the same.

According to House Speaker Nancy Pelosi, the Democrats' bill focuses on what they see as priorities: government-paid sick leave for certain workers, assistance for children who rely on school lunch programs, and expanded unemployment insurance.

"We're ready with our legislation. ... We can only support an initiative that puts families first and not trickle-down solutions that help up here that eventually have a collateral benefit down here," Pelosi said.

Pelosi said Tuesday that lawmakers were still waiting for the Congressional Budget Office and legislative council to sign off on the bill. Depending on when that approval happens, The New York Times says Democrats could introduce the bill and try to vote on it this week before lawmakers in both chambers leave Washington for a recess.

President Trump's economic stimulus proposal, meanwhile, involves a payroll tax cut that would possibly last through the end of the year.

Many Democrats were critical of the idea, and Sen. Lindsey Graham told reporters that even his Republican colleagues have "mixed" feelings on the president's plan.

President Trump and White House officials are scheduled to meet Wednesday with Wall Street executives and representatives from Facebook, Amazon and other tech companies to discuss how to better coordinate a response to the virus outbreak.