Pelosi's Impeachment Announcement Is A Major Change Of Course 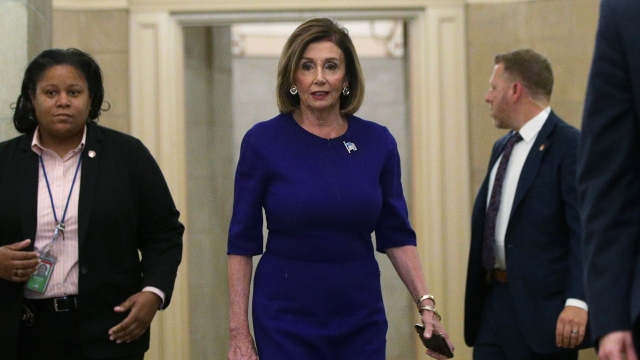 "The actions of the Trump presidency revealed dishonorable fact of the president's betrayal of his oath of office, betrayal of our national security and betrayal of the integrity of our elections."

Her decision came amid mounting pressure from the Democratic caucus following reports that President Trump pressured the Ukrainian government to investigate Joe Biden and his son.

President Trump responded to Pelosi's announcement on Twitter by calling it "Witch Hunt garbage" and accused Democrats of demeaning his work at the United Nations General Assembly.

Until now, Pelosi was reluctant to move forward on impeachment, despite her criticism of the president and his administration. She's remarked on the political cost of impeachment, especially ahead of the 2020 election.

Pelosi has said in the past that there was not conclusive evidence to support impeachment and that any effort would lack bipartisan support. She said in March that President Trump wasn't worth dividing the country and that an investigation would likely galvanize his base.

But those concerns may have been alleviated in a closed-door meeting between Pelosi and her Democratic colleagues Tuesday afternoon. More than two-thirds of House Democrats have voiced support for an impeachment inquiry, and it's likely that Pelosi could no longer ignore that groundswell.

Speaking at The Atlantic Festival on Tuesday, Pelosi rebuked President Trump amid allegations that he solicited election help from Ukraine.

She said: "If the president brings up, he wants them to investigate something [about his political opponent], that is self-evident that it is not right. We don't ask foreign governments to help us in our elections."

The question now is whether House Democrats will pay a political price for what could ultimately become a gift to President Trump and his supporters.