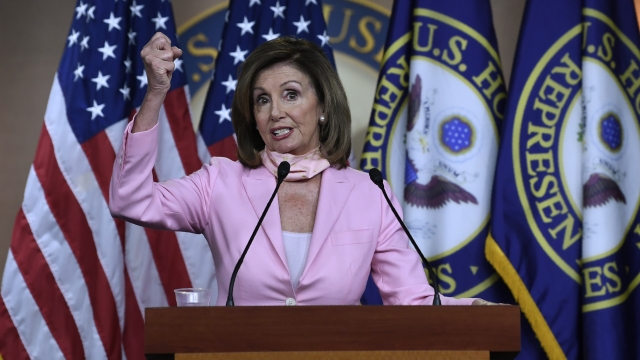 SMS
Pelosi Orders Confederate Portraits Removed From Capitol
By Ahmed Jawadi
By Ahmed Jawadi
June 18, 2020
Portraits of four former House speakers who served in or fought for the Confederacy will be removed from the Capitol.
SHOW TRANSCRIPT

House Speaker Nancy Pelosi has ordered the portraits of four former House speakers who served in or fought for the Confederacy to be removed from the U.S. Capitol building.

In a letter to the House clerk on Thursday, Pelosi requested "the immediate removal of the portraits" from the halls of Congress, calling them "symbols that set back our nation's work to confront and combat bigotry."

The men in question are Robert Hunter of Virginia, Howell Cobb of Georgia, James Orr of South Carolina and Charles Crisp of Georgia.

Pelosi said during a news conference later in the day that she didn't know about the former speakers' ties to the Confederacy until recently, but that with Friday being Juneteenth, now is the right time for the portraits to be retired.

"The clerk will oversee the removal of those Confederate Speakers from the House," Pelosi said. "As I've said before, there's no room in the hallowed halls of this democracy, this temple of democracy, to memorialize people who embody violent bigotry and grotesque racism of the Confederacy."

Pelosi also recently called for the removal of 11 Confederate statues from the National Statuary Hall Collection.