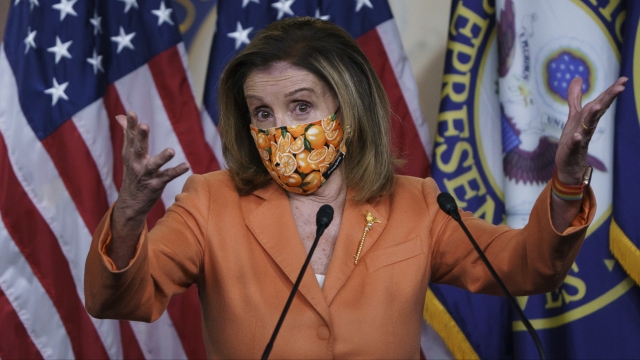 SMS
Pelosi, Mnuchin Expected To Continue Stimulus Negotiations
By Briana Koeneman
By Briana Koeneman
October 19, 2020
Nancy Pelosi says they must reach an agreement by Tuesday if they want to pass a bill before Election Day.
SHOW TRANSCRIPT

Pelosi says they must reach an agreement by Tuesday if they want to pass a bill before Election Day.

The president told Newsy's sister station in Milwaukee he's prepared to offer more than the White House's current number of $1.8 trillion. But Senate Republicans are already opposed to spending that much.

"The Senate Republicans have been very vocal in terms of their lack of support of a number that is even close to what the president has already supported," said White House Chief of Staff Mark Meadows. "I can tell you this, there are some in the Senate that will support it. Whether there is enough votes, that's up to Leader McConnell, he's agreed to bring forth the bill if we have a bipartistan agreement, but its too early to tell."

Key sticking points include language related to a national testing and tracing plan, as well as state and local aid.