Here's One Thing That Could Lower Re-incarceration Rates 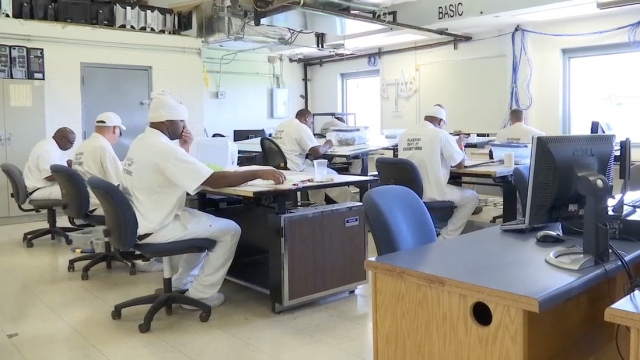 SMS
Here's One Thing That Could Lower Re-incarceration Rates
By Melissa Prax
By Melissa Prax
September 15, 2016
The Obama administration has pushed to give prisoners access to Pell Grants, but not everyone likes the idea.
SHOW TRANSCRIPT

The U.S. has a lot of people in prison. And one solution to keep prisoners from returning to a life behind bars could be an education.

"There's a lot of hopelessness in here," said Lawrence Miller, instructor at Limestone Correctional Facility. "With some education, it gives you a little hope as to a future."

One study showed former inmates were 43 percent less likely to return to prison within three years if they were educated there. But a lot of prisoners can't afford to take classes.

SEE MORE: Risk, Reward And Redemption At A Restaurant Staffed By Former Inmates

That's why there's a push to get inmates pell grants, and a pilot program backed by the Obama administration is underway.

But because pell grants often offer lower-income students financial aid, some movements are against prisoners also being eligible.

Prisoners haven't qualified since the '90s.

Although an educational program can be the difference between re-incarceration, which can save tax payers.

It's not just about getting our country's re-incarceration rates down. Millions with criminal records have a hard time getting a job — and because they often can't, it ends up hurting the economy.

In 2014, the U.S.' GDP took an estimated hit of $78 million to $87 million because former convicts and prisoners couldn't work.

Take nonworking men ages 25 to 54 for example. Thirty-four percent of them have a criminal record.

Because Congress hasn't passed expansive pell grant eligibility for prisoners, it can only be a temporary, test program. But, both the House and Senate have bills that could expand it.