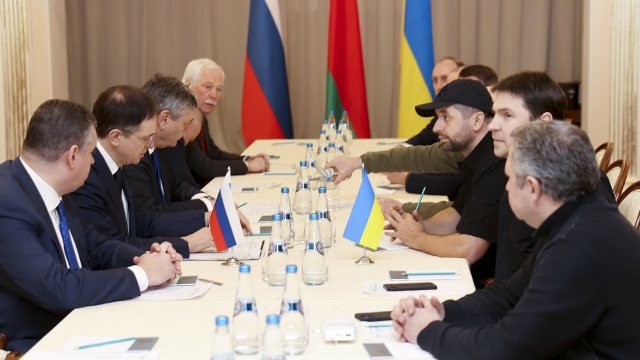 It's the seventh day of Russia's brutal war on Ukraine, and there's a delay in peace talks.

As the shelling on Ukraine's cities targets more civilians, global calls for a ceasefire grow louder.

"It is the gravest security situation since World War II," Polish Foreign Minister Zbigniew Rau said. "It puts all endeavors of international community related to peace and security under a question mark."

Ukrainian negotiators arrived on helicopters as talks between both sides began Monday in Belarus, but the only firm agreement made by the delegations was to keep meeting.

Officials have agreed to a second round of talks Thursday in the Belarus border region of Brest. But Ukraine’s foreign minister suggests finding common ground will be unlikely.

"Now we are ready for talks, for diplomacy, but we are not ready to accept any Russian ultimatums at all," Ukrainian Foreign Minister  Dmytro Kuleba said.

Ukraine wants a ceasefire and Russian troops to leave the country, but Russia comes to the table with a longer list of demands.

It includes Ukraine giving up its military, as well as the Donbas. That region is comprised of two breakaway enclaves plus more territory.

And Moscow demands the Crimean peninsula it annexed in 2014 be recognized as Russia’s and still wants assurances Ukraine will never join NATO.

Experts say Russia has little reason to concede its demands.

“It basically looks as though they're going to surround Kyiv, bringing heavy forces with a threat of violence, to try and get some concessions from Zelenskyy or someone else.” military analyst Rob Lee said.

Analysts believe Ukraine won’t be able to hold onto the country indefinitely.

“It's going to get really quite grim," said Justin Bronk, airpower and technology research fellow at Royal United Services Institute. "The odds of Ukraine defeating this Russian invasion, if it continues on and they switch on to kind of full bore mode, as it were, are pretty poor."

The U.N. General Assembly overwhelmingly voted in favor of a resolution, demanding Russia end its war on Ukraine and withdraw all troops.

But those demands, and others like it, have done little to deter Putin's attack.

Ukrainians are showing they’re defending their country and freedom especially as peace feels far off.

And Ukrainian President Volodymyr Zelenskyy remains wary on the talks. When a CNN reporter asked, "Do you think you're wasting your time or do you think they're ready?" He said, "We'll see."