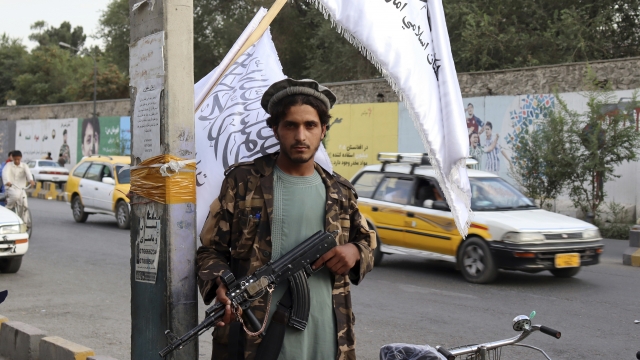 SMS
PBS Correspondent Jane Ferguson Speaks On The Reality Of Taliban Rule
By Newsy Staff
By Newsy Staff
September 8, 2021
The award-winning correspondent for PBS Newshour spoke with Newsy about what Afghanistan looks like on the ground.
SHOW TRANSCRIPT

To go a step deeper into coverage on Afghanistan, Newsy spoke with someone who has covered war in Afghanistan for over a decade – Jane Ferguson.

She is a Polk, Emmy and duPont award-winning journalist and correspondent for PBS Newshour. She's also one of the last western journalists to leave Kabul's airport.

Ferguson's flight took off just hours before the deadly bombing nearby.

Jamal Andress: Jane, thanks for being here. I want to start with can you just describe what it was like on the ground at that time if you have ever seen it quite that chaotic?

Jane Ferguson: I've never seen anything like that and I've been covering wars, revolutions, upheaval humanitarian crises all over the world for 13, 14 years. And there were other journalists there, a couple of other journalists who were more senior who had been covering wars for decades who had never seen anything like this. This was an evacuation under duress, under an unbelievably tight time frame of incredibly panicked people. And it was essentially roads around an airport blocked by panicked humans, like families, men, women and children – many of them not carrying very much at all, the odd suitcase the odd backpack, but just desperately trying to get in. There was you know some of my colleagues and I sort of chatting about it compared to some sort of distopian dream. It was bizarre. You would have groups of soldiers from any of the NATO or allied countries just wandering around independent of one another – Canadians, Polish, British, American Marines, then you would also have Taliban commanders sort of attempting to man what they would call checkpoints but really, just isolated gunmen trying to do sort of very, very crude and violent crowd control.

Jamal Andress: There are quite a few Americans still there in Kabul, despite the major effort from President Biden. Can you talk about what their reality is right now?

Jane Ferguson: Right now they have an airport that's not functioning, at least not for international flights. Some domestic flights started again but there's no radar system so these flights are essentially taking off and landing on sight. So they don't have a way out of the country on airplanes.

Across the border over land to Pakistan is the main option for people, but even then you need some form of paperwork. The Pakistani government is not just allowing people from Afghanistan en masse to enter the country. You need a certain degree of Visa to get into Pakistan.

And even then, it's not a very safe journey, necessarily, from major cities or the capital of Kabul to get to the border with Pakistan. So it's a very unstable situation right now, although the Taliban are doing their best to consolidate control to put forward an image that they are very much so in control, that they're forming a government. If you're American and you're in Kabul or anywhere in Afghanistan right now, this is a very, very adrift place to be. There are no more American or American-friendly soldiers in the country and if you're there and you're trying to get out you're most likely lying low for now.

Jamal Andress: You know, you mentioned the Taliban there's been this talk recently in the last few weeks about this new Taliban, a younger, more tolerant group that wants to be taken seriously on the world stage. Has that been your experience? How would you describe the Taliban that's taken power right now?

Jane Ferguson: They certainly tried to put forward that image, Jamal, when they first came in. That was a very, very deliberate tactic. They gave a press conference where they declared themselves peaceful, they wanted the international community to come in and help to remain engaged, they threw the first question to a female reporter, they announced that women would be free to work. The reality has been, at best, much more mixed and in reality, actually the Taliban, when it comes to what they do as opposed to what they say are looking much more like the Taliban of the 90's.

They're starting to announce some government positions – none of them to women – many of them to hard-line extremists, some of them on international terrorist lists. You know, women have been told they can work and then ordered home, ordered into their homes nationwide. Then told they could work but under extremely restrictive circumstances. So, realistically, what some of the political leadership of the Taliban might be telling the international community you know, is something that might try to -- that they will use to try to keep the cash dollars flowing in, to keep schools running, to keep hospitals running, but in reality, how that translates on the ground with their foot soldiers – that's a very different thing. We're seeing women attacked in the street for protesting for their rights. We're also seeing a lot of women who are just too afraid to go out.

You know the one important thing that I think to remember in all of this is that when the Taliban came out and announced that they were this new kind of Taliban light, Taliban modern, the thing we have to remember is: it isn't 20 years since they ruled the country. They've been ruling swaths of the country for the entire time. I have been to Taliban-controlled years of Afghanistan only months ago and those areas had no girl schools. So when they say it's going to be different this time, what time do they mean? Because it's never been different.

Jamal Andress: You said recently in another interview that this story, specifically the plight of Afghan women has been largely ignored by the American press, by American politicians. Now, it's all anyone wants to talk about. With all that in mind, what do you make of that change of pace? Do you think it will last? Do you think it's real?

Jane Ferguson: I don't think anything really lasts, unfortunately, when it comes to media attention because that's just the nature of our industry, unfortunately. But, it's true, we have seen this uptick in interest in Afghanistan, in Afghan civilians, in what happens to them and how important it is to protect the rights that they've built up however flawed, however patchy across the country over the last 20 years. We have started to see these stories coming out and it is good, it's a good thing. I'm really grateful to see it. But it's been very frustrating over the last 10 years you know, watching how little Afghanistan has been covered and what has been striking has been that a lot of the issues that played into the events of the last few weeks have been developing and building. Now none of us, myself included, none of us could ever have predicted that the Taliban would walk into Kabul overnight unopposed militarily so, so, so fast but many of the other issues like women's issues, economic problems, ethnic tensions, the struggling Afghan security forces – these are all stories that have been there for several years now at least. But have just been relatively uncovered.

Jamal Andress: Jane Ferguson, correspondent for PBS Newshour. Thank you for your bravery, your reporting and for being with us here on Newsy.