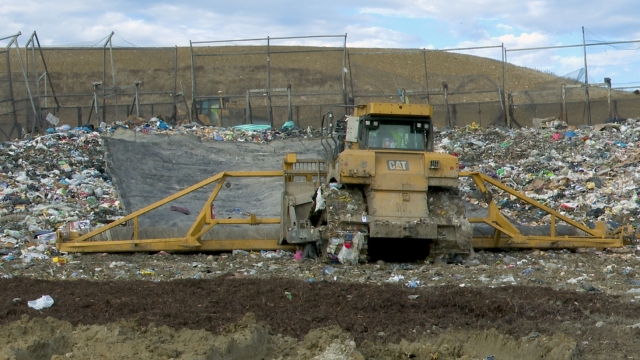 Charging people by how much garbage they send to the landfill can reduce waste by up to 20%.

Take Columbia, Missouri. It’s estimated each household produces 2,000 pounds of trash per year… which comes out to 35,000 tons annually for this college town — and that's just residential curbside customers.

To lighten the load… Columbia started a "pay-as-you-throw" program in February, which encourages residents to throw away less through a price plan that varies per household.

"Before we made the changes we did last fall, there was no limit to what a customer could put on the curb," Steve Hunt, said. "You could literally put your entire contents of your entire house on the curb."

More and more cities are using some form of a pay-as-you-throw program. Economist Lisa Skumatz, who has worked on waste disposal initiatives since the mid-1980s, says all but two states have it.

"Back in the 80s, maybe a hundred communities had access to pay as you throw, Skumatz said. "Our last count found over 10,000 communities."

She says pay-as-you-throw programs can reduce waste by up to 20 percent. Instead of putting that waste in a landfill, it goes into other areas like recycling, composting and reuse.

There are many different types of pay-as-you-throw. In Columbia, it goes like this: Residents get 104 bags per year for free — that’s two bags a week. If they need more than that, additional bags are sold for $2 a piece.

Other programs charge residents for every bag they use. There have been concerns that this type of program could lead to illegal dumping.

"It turns out that may be a legal issue for perhaps three months after that, it seems to go away," Skumatz said.

A way to try to prevent this, she says, is by adopting a can-based program where residents pay by the size of the trash can or roll cart they use.

And it’s not. The truth is, landfilling waste has become more expensive over time because of regulations put in place designed to make them safe.

"There's a lot of cost in the landfilling process that didn't used to be there," Dancy said.