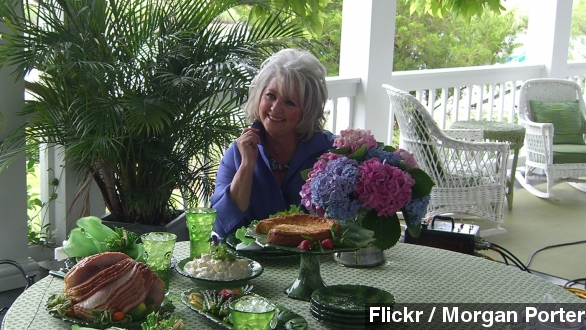 Paula Deen has whipped up a plan to make her way back into Americans' kitchens — through computers, smartphones and tablets. (Via Flickr / Morgan Porter)

"She is launching her own cooking network, but not on the TV, on the Internet. It will be a subscriber-based Internet network. Paula and her guests will be cooking in front of an audience." (Via Fox Business)

According to Deen's website, the digital network, appropriately dubbed "The Paula Deen Network," will launch sometime in September. It'll include on-demand videos of the former Food Network star and various guests cooking in a production studio near Deen's home in Georgia.

"You can throw out your TV now because this is where you can find me. And trust me, it's a heck of a lot lighter to tote around than that TV." (Via YouTube / Paula Deen)

Entertainment Weekly reports fans will have to pay a subscription fee to view the content. And if you're skeptical, the outlet reports a 14-day trial period will be offered to all users after the September launch.

Deen told The Wall Street Journal: "After much research and talking to our fans, this is what they wanted. They wanted to be able to watch me anytime, anywhere, any place. ... The fans are going to see things they have never seen before. They are going to see all of me."

The new Paula Deen Network is owned by her company, Paula Deen Ventures, and is backed by a $100 million investment from the same private-equity company that owns SkyMall. You know, the airplane catalog.

Paula Deen Ventures received the massive investment back in February — nearly eight months after Deen admitted to using a racial slur. (Via E!)

Not only did that admission make headlines for weeks, but it also resulted in the loss of dozens of Deen's product endorsement deals and her contract with the Food Network.

She told People magazine back in February she's been working to clear her name ever since the scandal. "When I woke up each morning, it was like my world was crashing down again. ... I'm fighting to get my name back."

But will this new digital network have enough juice to propel Deen back to the top?

The Wall Street Journal notes it depends on how many of Deen's fans will be willing to pay for her content, how many younger viewers she can recruit and how much equity her brand has now that a year has passed since the scandal.

But, as Businessweek points out, other former television stars have tried similar strategies and seen success, including former Fox News host Glenn Beck.

After leaving the network in 2011, Beck launched a digital network of his own that's now known as TheBlaze TV. In the past few years, it's attracted a sizeable audience by collecting a range of deals with both traditional and nontraditional distributors.

Well, we guess only time will tell, y'all! No word yet on how much a subscription to The Paula Deen Network will cost. Probably at least a stick of butter.