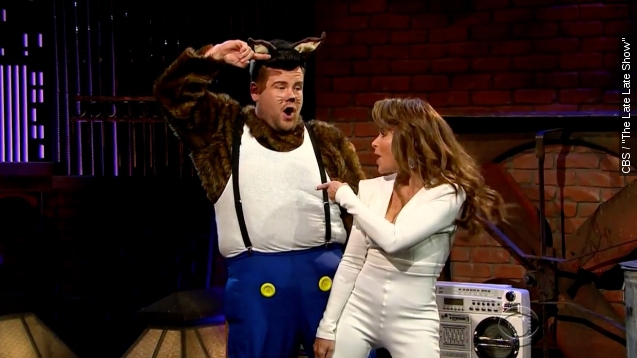 Paula Abdul and James Corden remade her music video for the 1989 hit "Opposites Attract" Tuesday on "The Late Late Show."

Paula Abdul stopped by "The Late Late Show" Tuesday night, and it seems like host James Corden thought it was time to remake another classic pop culture moment.

"Swift and sly and I'm playing it cool with my homegirl, Paula Abdul," Corden sang.

We gotta admit Corden makes a pretty good M.C. Skat Cat — the cartoon cat that Abdul starred with in the original video.

And while the premise of the video might be a little kooky — Abdul and a cat falling in love — "Opposites Attract" was a No. 1 hit for the singer. (Video via Virgin Records / Paula Abdul)

Particularly because of all the dance choreography Abdul and Corden had to perform.

A reporter for Entertainment Tonight summed up all our thoughts perfectly, writing, "Is it just us or does Paula look totally stunning? More importantly, how does James dance THAT WELL in a full cat costume? It's absolutely mind-blowing."

To watch the entire clip head on over to CBS's website.