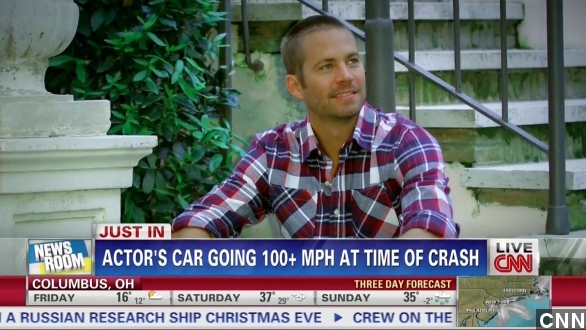 ​"The car he was riding in, I'm going to quote this here, 'traveling at an unsafe speed, approximately 100+ miles per hour.'"

"Walker was in a defensive position as if he were bracing for an impact." (Via CNN)

Both the death of Paul Walker and his friend Roger Rodas were ruled accidental. The pair had been leaving a charity event at the time of the crash. (Via KFMB)

"The autopsy showed Walker died of the combined effects of traumatic and thermal injuries." (Via KCBS)

New York Daily News called the report "gruesome" and explained the actor's hair and eye color couldn't even be determined during a visual exam. He was also charred through the skin.

According to the coroner, neither he nor his friend behind the wheel had alcohol or drugs in their systems.

Walker was known for his role in "Fast & Furious," where he originally played undercover cop Brian O'Conner. (Via Universal Pictures / "Fast & Furious 6")