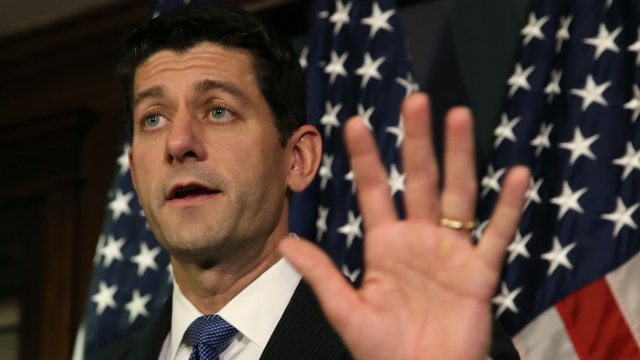 A letter from the Pentagon outlined a strategy to block the bill, which is backed by House Republicans.

House Speaker Paul Ryan isn't too happy about an internal memo from the Pentagon that outlined a plan to oppose House Republicans' defense spending bill.

The memo, obtained by Politico, urged Pentagon staff to "attack" the bill and "be prepared to play hardball opposing it."

SEE MORE: How Congress Bypasses The White House To Fund The Pentagon

It said, "It's shameless, and it threatens more than five decades of bipartisan cooperation to enact a national defense bill for our troops."

Ryan's biggest complaint seems to be how it threatens to use a presidential veto as a weapon.

The letter describes the veto as "the principal weapon at our disposal."

The leaked memo goes on to detail several key figures in the upcoming vote, including Sen. John McCain and Rep. Mac Thornberry — the chairmen of the armed services committees for the Senate and House respectively.

The memo lists strategies about how to challenge each person and areas where they might be weakest.

Thornberry released a statement of his own saying it was "rather sad that some in the Obama administration spend so much time and effort playing political games."

Thornberry is described in the memo as "still smarting" from when a defense bill was vetoed last year.

The Pentagon's issue with the spending proposal seems to focus on an extra $18 billion included in the budget. It was taken from a war funds account to get around budget caps. The letter calls it a "gimmick."

SEE MORE: If You Can Hack The Pentagon, The DOD Would Like To Give You Money