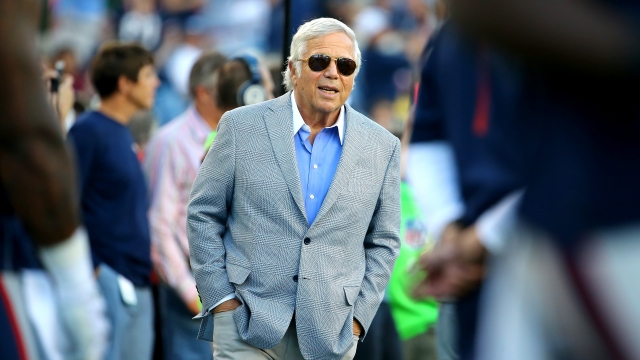 SMS
New England Patriots Owner Robert Kraft Charged With Soliciting Sex
By Alec Larson
By Alec Larson
February 22, 2019
​The charges stem from a raid at a day spa in Jupiter, Florida, where Kraft was picked up by police as part of a sting.
SHOW TRANSCRIPT

Police announced on Friday that New England Patriots Owner Robert Kraft has been charged with two counts of soliciting someone to commit prostitution in Jupiter, Florida.

The charges stem from a raid at a day spa as part of a months-long sex trafficking sting in the area surrounding Palm Beach County. Kraft is facing charges that specifically pertain to "two different visits" to the spa in Jupiter, where he was recorded engaging in paid sex acts. Overall, more than 20 people are facing charges.

According to Jupiter police, charges have been filed against Kraft but he has not been arrested.

The NFL is allowed to discipline the owners of teams for their personal conduct. In 2014, Indianapolis Colts owner Jim Irsay was suspended for six games after he was arrested on drug charges. It also fined former Carolina Panthers owner Jerry Richardson $2.75 million in 2018 after Sports Illustrated reported he sexually harassed women on multiple occasions. Richardson eventually sold the team.

Kraft has owned the New England Patriots since 1994. The team released an announcement soon after the news broke, denying that Kraft had committed a crime.